Generally created as nonhosted families, variable air volume (VAV) terminal boxesare usually mounted somewhere within the ceiling void, suspended from the underside of the slab above.
In terms of placement, these are given an offset. Using the Properties palette, the offset can be predefined prior to the VAV being placed in this case. This makes for an easier workflow than in previous releases, in which most objects were placed on the reference level and then subsequently moved to the correct invert level (see Figure 10.6).
Connections to both AC units and VAV boxes can include heated and chilled water services, and electrical for connecting to water and electrical systems (see Figure 10.7). Also note the new connector labels in this view, which allow easier identification of connections and their flow direction (where applicable).
Ductwork
Ductscan be displayed in a variety of ways, including rectangular, round, oval, or placeholder, as shown in Figure 10.8. 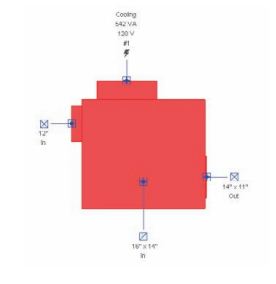 Figure 10.7
Typical mechanical and electrical
connections to
mechanical
equipment
Placeholder ducts, as you can see in Figure 10.8, are shown only as a single line, although they retain nearly all the characteristics and properties of a regular duct. In Figure 10.9, you can see the differences. Placeholder ducts do not have values for Justification, Insulation, or Lining, because they are just not needed at the conceptual stage of the project when placeholders are
being used. 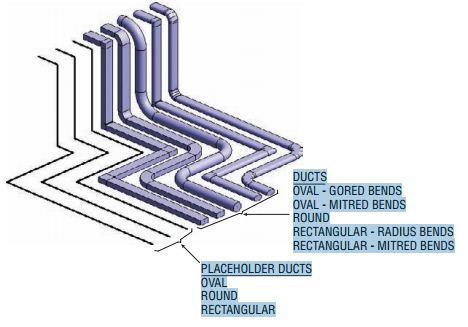 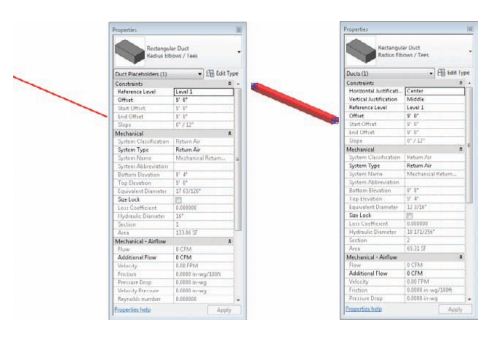 Figure 10.9
Design criteria for
placeholder ducts
The Duct tool is a system family, and it is the glue that holds systems together. However, it also relies on standard families to create a duct type, as described in the next section. Although ducts hold a huge amount of information, for the user there are several important considerations to note.
As you saw in Chapter 8, “HVAC Cooling and Heating Load Analysis,” Revit MEP 2012 provides significant enhancements to systems, including the ability to specify the type of system that a duct is associated with (Exhaust, Return, or Supply), without actually being connected to any equipment, as shown in Figure 10.10.
When highlighted in the System Browser, both ducts and placeholder ducts are highlighted in the drawing area.
If a duct is created in the wrong system type, simply select one section of the run and change it to the required system. All the connected ducts and fittings will also change.
Connecting a defined system of mechanical equipment into an existing duct run of the same system type will combine them together into one system, so the ducts will always be associated with a system, as shown in Figure 10.11. 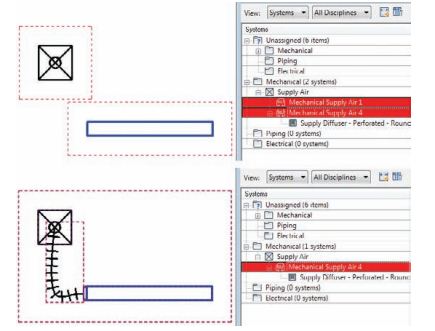 Figure 10.12 shows what happens when you try to connect a defined system of one type to
a run of ducts that are part of another system. This warning is a good heads-up for the user. If the operation was deliberate, however, all you need to do is select a duct and change it to the relevant system.
In Revit MEP 2012, all systems are named. Even though they may be default names, it is easy to change them on the fly.
New to Revit MEP 2012 is that, when running an interference check, the duct insulation can be included as part of the interference (see Figure 10.13).