The LINE command, essential to all AutoCAD drawings, is the first command
you’ll explore as you construct the shape shown in Figure 2.1.
Whenever you start a brand-new drawing in AutoCAD, it’s always best to take
a step back and consider the object(s) you would like to construct. In thiscase, the shape shown in Figure 2.1 most closely resembles a square. To apply
this basic strategy, you’ll begin by defining each of the four sides of the square by using the LINE command, and then you will build on this basic shape with several additional commands introduced later in this chapter. 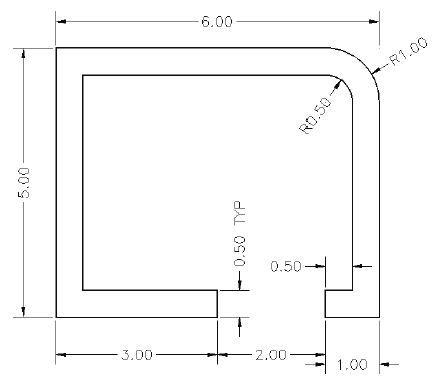 F igu re 2 . 1 : The shape you’ll draw
The LINE command draws a straight-line segment between locations on existing objects, geometric features, or two points that you can choose anywhere within the drawing area. You can designate these points by left-clicking them on the screen, by entering the x- and y-coordinates for each point, or by entering distances and angles from an existing point. After you draw the first segment of a line, you can end the command or draw another line segment beginning from the end of the previous one. You can continue to draw adjoining line segments for as long as you like. Let’s see how this works.
To be sure that you start with your drawing area configured the way it’s set
up for this book, you’ll create a new drawing. The Start Drawing tool found onthe Create page of the New Tab provides a convenient way to create and manage open drawings. Follow these steps to prepare your first AutoCAD drawing:
1. Click the New Tab icon at the right end of the File Tab interface. This
opens the Create page of the New Tab interface.
2. Under the Start Drawing tool, click the disclosure triangle for
Templates, and then select the acad.dwt file (acadlt.dwt for
AutoCAD LT users) as shown in Figure 2.2. 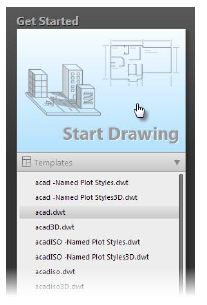 F igu re 2 . 2 : Choosing the acad.dwt template from the Get Started
panel of the New Tab3. With the correct drawing template selected, click the Start Drawing
tool shown in Figure 2.2 to open a new blank drawing.
4. Right-click the File Tab for the drawing you just created and select
Close All Except This Tab from the menu, as shown in Figure 2.3.The File Tab interface includes a tab for each drawing you have
open. Although File Tabs are most commonly used to switch between
open drawings, you can also use the interface to manage which
drawings you have open. 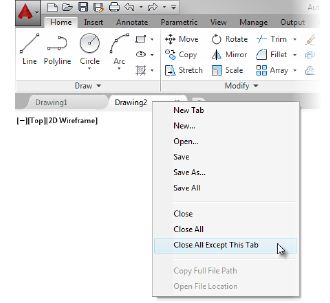 F igu re 2 . 3 : Using the File Tab interface to manage open drawings
It is also possible to close drawings individually by clicking the X on the right
side of each tab.
After creating a blank drawing file with acad.dwt, you are ready to begin your
first drawing. To get started creating designs in AutoCAD, follow these steps to
begin using the LINE command:
1. Each of the drawing aids found on the status bar that runs along
the bottom-right edge of the Application window has a specific function
assigned to it. To ensure that the task at hand aligns with the
active aids, it’s always a good practice to check which drawing aids
are turned on before you begin drawing anything in AutoCAD. You’ll
notice some of the tools, such as Object Snap, are turned on, while
others remain off.

Make sure that Polar Tracking, Object Snap Tracking, and Object
Snap are turned on and that all the others are turned off. You can
identify the icons by pausing over each to display its tooltip. Your
toolbar should look similar to Figure 2.42. From the Ribbon, choose the Home tab ➢ Draw panel, and then click the Line tool. Look at both the bottom of the command-line interface and your cursor. Because Dynamic Input is turned on, prompts such as this one display both at the command line and next to the cursor(see Figure 2.5).
T I P You can also start the LINE command by typing LINE or L and pressing the
Enter key, the spacebar, or the right mouse button.
The prompt now tells you that the LINE command is started
(Command: _line) and that AutoCAD is waiting for you to designate
the first point of the line (Specify first point:).

F igu re 2 . 5 : Both the command prompt and the cursor change to reflect the
current command.
3. Move the cursor onto the drawing area, and note that the small box
at the intersection of the crosshairs is not there.
When the cursor is used to select objects (the default condition),
a small square displays atop the cursor. This small square cursor is
known as the pickbox and indicates when AutoCAD expects you to
select an existing object in lieu of a point. When the cursor is used to
designate a point in commands such as the current LINE command,
the pickbox is not visible. Using the left mouse button, click a random
point in the drawing area to start a line4. Move the cursor away from the point you clicked, and notice how a
line segment appears that stretches like a rubber band from the point
you just picked to the cursor. The line changes length and direction
as you move the cursor, and these values are shown as input boxes in
the drawing area.
5. Look at the command line again, and notice that the prompt has
changed (see Figure 2.6).

F igu re 2 . 6 : The command prompt changes for the next point, and the line’s
length and direction are shown in the drawing area.
The prompt is now telling you that AutoCAD is waiting for you to
designate the next point (Specify next point or [Undo]:).
6. Continue picking points and adding lines as you move the cursor
around the screen (see Figure 2.7).

F igu re 2 . 7 : Drawing several line segments
After you draw the second segment, the Command window repeats
the Specify next point or [Close/Undo]: prompt each time you
pick another point. The Dynamic Input fields and command prompt
appear near the cursor, showing the angle and distance from the last
point selected.7. When you’ve drawn six or seven line segments, press ↵ to end the LINE
command. The cursor separates from the last-drawn line segment.
The Type a command: prompt has returned to the bottom line.
This tells you that no command is currently running.
T I P Pressing ↵ exits the LINE command and several others. Another option
to exit the LINE command is to right-click and choose Enter from the context menu.
This requires an extra step, but it still may be faster, because your eyes never leave the
screen. When you’re not entering data, the spacebar also acts like the ↵ key and executes
a command.
In this exercise, you used the left mouse button to click the Line tool on the
Ribbon and also to pick several points in the drawing area to make line segments.
You then pressed ↵ on the keyboard to end the LINE command.

Saving Drawings to Your Hard Drive or Network Drive