The FILLET command lets you round off a corner formed by two lines. You
control the radius of the curve, so if you set the curve’s radius to 0, the lines
form a sharp corner (without a curve or arc). Thanks to this behavior of the
FILLET command, it is commonly used to clean up corners such as the ones
formed by the lines inside the box. You must pick points on the filleted lines to
indicate portions that will remain after the fillet is implemented; otherwise, the
wrong portion of the line may be retained. Figure 2.21 illustrates how to use the
FILLET command to achieve the desired result. 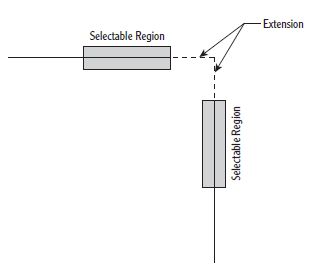 F igu re 2 . 2 1 : Selecting objects to obtain the expected result when using the FILLET
command

1. When the command line reads just Type a command, launch the
FILLET command by choosing the Home tab ➢ Modify panel ➢
Fillet tool. Notice how the command-line interface changes after
you’ve clicked the Fillet icon (see Figure 2.22).
F igu re 2 . 2 2 : The command prompt after initiating the FILLET command
The default Fillet radius should be 0.0000 units. Like the Offset
distance, the Fillet radius remains set at a constant value until you
change it.
2. If your Command window displays a radius of 0.0000, go on to step
3. Otherwise, click the Radius option at the command line, and then
type 0↵ to change the radius to 0.

3. Move the cursor—now a pickbox—to the shape, and click two intersecting
lines, as shown at the top of Figure 2.23. Hovering over the
second line (Figure 2.23, bottom) causes the lines to glow blue along
the line segments that will remain.

F igu re 2 . 2 4 : The first cleaned-up corner
4. Press ↵ to restart the command, and this time type M↵ to activate the
Multiple option. Multiple repeats the FILLET command until another
option is initiated at the command prompt or the command is terminated
with the ↵ or Esc key or the spacebar.
5. Fillet the lower-left and lower-right crossing lines to clean up those
corners (see Figure 2.25) and press ↵.

6. Press ↵ to restart the FILLET command. This time, choose the Radius
option; then enter 0.5↵ to set the fillet radius to 0.5, and click the two
lines that make up the interior upper-right corner.
After a command has ended, you can restart it by pressing either ↵
or the spacebar or by right-clicking and choosing Repeat from the context
menu.

As you hover over the second line to fillet, notice the real-time
0.5-unit fillet preview that displays.
7. Restart the command, set the radius to 1.0, and then fillet the outer
upper-right corner. Your box should look like Figure 2.26.

The OFFSET and FILLET commands provide you with a powerful combination
of tools for laying out walls on a floor-plan drawing. Because these commands
are so important, let’s take a closer look at them to see how they work. Both
commands are in the Modify panel of the Ribbon’s Home tab, and in the Modify menu of the menu bar, both have the option to enter a numeric value or accept the current value—for offset distance and fillet radius—and both hold that value as the default until it’s changed. However, the OFFSET command keeps running until you stop it, and the FILLET command stops after each use unless the Multiple option is invoked. These commands are two of the most frequently used tools in AutoCAD. You’ll learn about more of their uses in later chapters.
The FILLET command has a sister command, CHAMFER, which is used to bevel corners with straight lines. When the distances for the CHAMFER command are set to 0, you can use the command to clean up corners in the same way that you use the FILLET command. Some users prefer to use CHAMFER rather than FILLET
because they don’t bevel corners, but they may at times use FILLET to round
off corners. If you use CHAMFER to clean up corners, FILLET can have any radius and won’t have to be overridden or reset constantly to 0. You’ll develop your own preference

An Addition to the Cabin