Using Layers as an Organizing Tool

To understand what layers are and why they are so useful, think again about the transparent overlay sheets used in hand drafting. Each overlay is designed to be printed. The bottom sheet might be a basic floor plan. To create an overlay sheet for a structural drawing, the drafter traces over only the lines of the floor plan that the overlay needs and then adds new information pertinent to that sheet.
For the next overlay, the drafter performs the same task again. Each sheet, then,
contains some information in common as well as data unique to that sheet.
In AutoCAD, using layers allows you to generate all the sheets for a set of
overlays from a single file (see Figure 6.1). Nothing needs to be drawn twice or
traced. The wall layout is on one layer, and the rooflines are on another. Doors
are on a third. You can control the visibility of layers so that you can make all
objects residing on a layer temporarily invisible. This feature lets you put all
information keyed to a particular floor plan in one DWG™ file. From that drawing,
you can produce a series of derived drawings—such as the foundation plan,
the second-floor plan, the reflected ceiling plan, and the roof plan—by making
a different combination of layers visible for each drawing or drawing layout (layouts
are covered in Chapter 14, “Using Layouts to Set Up a Print”). When you
make a print, you decide which layers will be visible. Consequently, in a set of
drawings, each sheet based on the floor plan displays a unique combination of
layers, all of which are in one file. 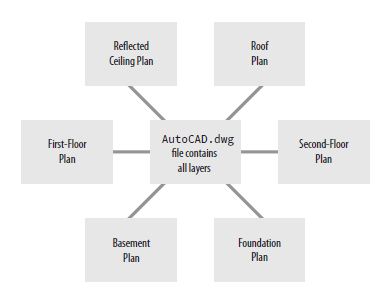 As an organizing tool, layers allow you to classify every object in a drawing
file—lines, arcs, circles, and so on—according to the component of the building
they represent, such as doors, walls, windows, dimensions, and notes. Each
layer is assigned a color, and all objects placed on the layer take on that assigned
default color unless you specify a different color for the objects. This lets you
easily distinguish between objects that represent separate components of the
building (see Figure 6.2). You can quickly tell which layer a given object or
group of objects is on. 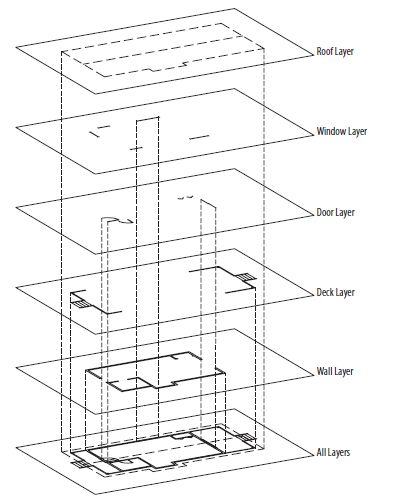 F igu re 6 . 2 : Separate layers combined to make a drawing

First, you’ll look at the procedure for achieving this level of organization,
which is to set up the new layers and then move existing objects onto them.
Following that, you’ll learn how to create new objects on a specific layer and find
out which objects reside on which layers.

Using the Traditional Colors of AutoCAD

Saving Drawings to Your Hard Drive or Network Drive

Rotating a Block during Insertion