A coordinate system consists of numbered scales that identify an initial, or base,point and the direction for measuring subsequent points on a graph. As illustrated in Figure 2.8, each pair of axes (xy, xz, yz) forms a flat plane. Most of your time working with AutoCAD will be spent drawing in the xy-plane. 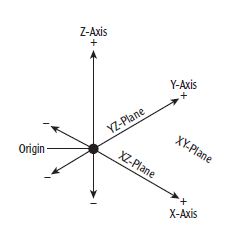 You can also start the ERASE command by typing E↵. In this next exercise,
you’ll use the LINE command again, but instead of picking points in the drawing
area with the mouse as you did before, this time you’ll enter the x- and y-coordinates
for each point from the keyboard. To do this, follow these steps:
1. Click the Erase icon in the Home tab ➢ Modify Ribbon panel.
2. Type ALL↵. The objects in the drawing become dashed to indicate
that they are selected.
3. Press ↵ to clear the screen.
4. Click the Grid Display icon on the status bar to display the grid if it is
not already turned on (blue glow). The gridlines that display provide a
graphical representation of the Cartesian coordinate system used by
AutoCAD.
Now begin drawing lines again by following these steps:
5. Start the LINE command by clicking the Line icon in the Home tab ➢
Draw panel on the Ribbon.
6. Type #7,2↵ to start the first line segment at a location 7 units above
and 2 units to the right of the drawing’s origin point.
7. Type #11,3↵ to determine the endpoint of the line. Then enter the
following:
#9,6↵
#7,2↵
#1,4↵
#3,7↵
#9,6↵
8. Press ↵ again to end the command.
Figure 2.10 shows the completed drawing with coordinates and
direction arrows added for clarity.F igu re 2 . 1 0 : Completed drawing showing coordinates and direction of lines 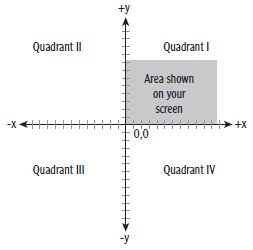 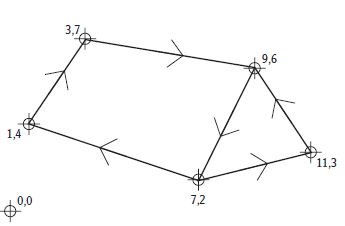 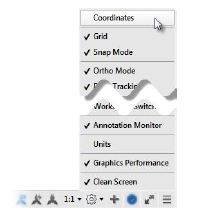 Drawing the Back Threshold Autocad

Three Views of a Block