Home / CNC Technology / USE OF TAPERS

Tapers are used on machines because of their capacity to
align and hold machine parts and to realign them when they
are repeatedly assembled and disassembled. This repeatability
assures that tools such as centers in lathes, taper shank
drills in drill presses, and arbors in milling machines will run
in perfect alignment when placed in the machine. When a
taper is slight, such as a Morse taper, which is about
it is called a self-holding taper, because
it is held in and driven by friction (Figure I-343). A steep
taper, such as a quick-release taper of in. per foot used on
most milling machines, must be held in place with a draw
bolt (Figure I-344).in. of taper per foot,
A taper may be defined as a uniform increase in diameter
on a workpiece for a given length measured parallel
to the axis. 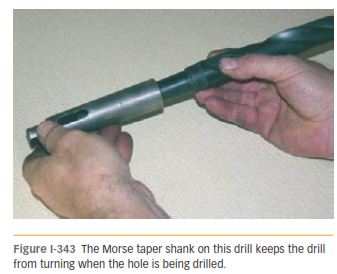 Internal or external tapers are expressed in taper
per foot (tpf), taper per inch (tpi), or degrees. The tpf or tpi
refers to the difference in diameters in the length of 1 ft or
1 in., respectively (Figure I-345). This difference is measured
in inches. 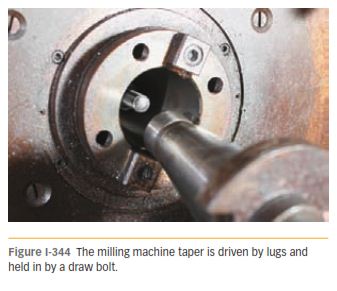 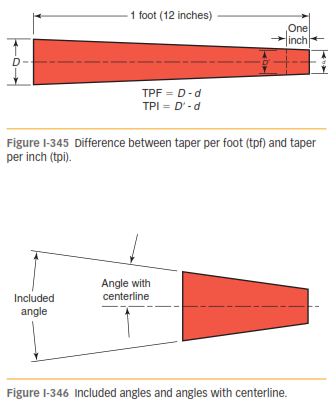 Angles of taper, on the other hand, may refer to the included angles or the angles with the centerline (Figure I-346).
Some machine parts measured in taper per foot are
mandrels (.006 in./ft), taper pins and reamers ( /ft), the
Jarno taper series (.006 in./ft), the Brown and Sharpe taper
series (approximately ), and the Morse taper series
(about ). Morse tapers include eight sizes that range
from size 0 to size 7. Tapers and dimensions vary slightly
from size to size in both the Brown and Sharpe and the
Morse series. For instance, a No. 2 Morse taper has
taper and a No. 4 has taper. See Table
I-7 for more information on Morse tapers.

METHODS OF MAKING A TAPER