USE OF FACE MILLING CUTTERS

The lead angle, which is the angle of the cutting edge measured from the periphery of the cutter, varies from 0 to 45 degrees, depending on the application. Small lead angles of 1 to 3 degrees can be used to machine close to square shoulders. 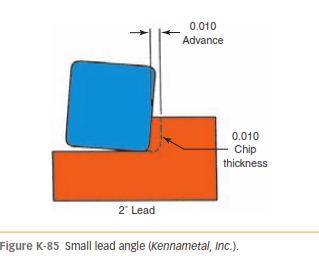 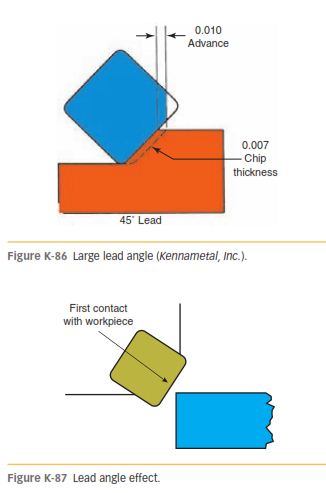 A small lead angle cutter, when used with a square insert, will have sufficient clearance on the face of the cutter to prevent its rubbing. Figure K-85 shows the effect of a small lead angle on chip thickness. With a .010 in. feed per insert, the chip is also .010 in. thick and as long as the depth of cut. Figure K-86 uses the same feed and depth of cut, but the chip is quite different. The chip now is longer than the depth of cut, and its thickness is only .007 in. A thinner chip gives an increased cutting edge life but limits the effective depth of cut. Feed rates of less than .004 in. per insert should be avoided. Figure K-87 shows another beneficial effect of a large lead angle: The cutter contacts the workpiece at a point away from the tip of the cutting edge. The cutter does not cut a full-size chip on initial impact but eases into the cut. The same thing happens on completion of the cut as the cutter eases out of the work.
The surface finish produced by a cutter depends largely on nose radius of the insert and the feed used. Figure K-88 is an exaggerated view of the ridges left by the cutter. The finish can be improved by the use of an insert with a wiper flat (Figure K-89). 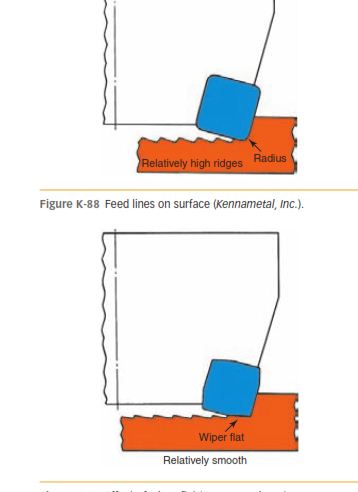 The cutting action of a face mill is also affected by its diameter in relation to the width of the workpiece. When it is practical, a cutter should be chosen that is larger than the width of cut. A good ratio is obtained when the cut is two thirds as wide as the cutter diameter. Cuts as wide as the cutter diameter should not be taken, because of the high friction and rubbing of the cutting edge before the material starts to
shear. This rubbing action results in rapid cutting edge wear.
Tool life can be extended when the cutting tool enters the workpiece at a negative angle (Figure K-90). The work makes its initial tool contact away from the cutting tip at a point where the insert is stronger. When possible, arrange the width of cut to obtain the cutting action in Figure K-90. 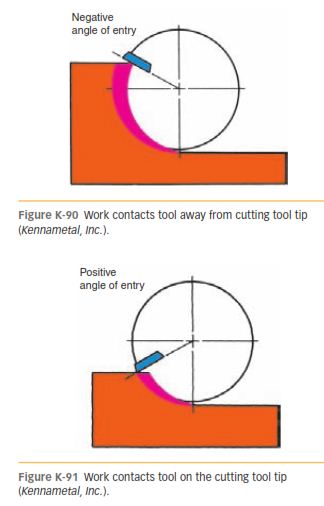 Figure K-91 illustrates a workpiece where the cutter enters at a positive angle. Contact takes place at the weakest point of the insert, and the cutting edge may chip. Figures K-90 and K-91 show a climb-milling operation. In climb milling, the cutter enters the work material, produces the thick part of the chip first, and then thins out toward the finished surface.

Climb milling should be performed whenever possible because it reduces the tool wear caused in conventional milling by the rubbing action of the tool against the work before the actual cutting starts.
Cutting fluid is important when a face mill is used. A good cutting fluid absorbs heat generated in cutting and provides a lubricant between the chips and the cutting tool.
In face milling, cutting fluid should be applied where the cutting is done, and it should flood the cutting area. Cooling a carbide face mill is difficult because of the intermittent nature of the cutting process and the fanning action of the revolving cutter. If the cooling of the carbide insert is intermittent, thermal cracking, which causes rapid tool failure, takes place. Unless a sufficient coolant flow at the cutting
edge is maintained, it is better to machine dry. A mist-type coolant application is sometimes used to provide lubrication between the chip and cutting tool. This reduces friction and generates less heat.
To machine a flat surface with a face mill, it is necessary that the face of the cutter and the travel of the table be exactly parallel to each other. If there is any looseness in the table movements or cutter runout, it will appear either as back drag or as a concave surface. Back drag appears as light cuts taken behind the main cut by the trailing cutting edges of the cutter. A concave surface is generated when the cutter is tilted
in relation to the table, so that the trailing cutting edges are not in contact with the work surface. A slight tilt, where the trailing cutting edges are .001 to .002 in. higher than the leading cutting edges, gives satisfactory surfaces in most applications.
Effective face milling operations are the result of many often small factors. Rigidity of the setup is of main concern. The workpiece must be supported where the cutting takes place. Rigid stops prevent the workpiece from being moved by the cutting pressures. The table should be as close to the spindle as possible. The gibs on the machine slides need to be adjusted to prevent looseness. Locking devices should be
used on machine slides. Coarse-pitch cutters usually have an uneven spacing of the teeth, which helps eliminate or reduce vibrations. Efficient machining requires sharp cutting edges.

Sharp cutting edges are dangerous to the operator. Worn tools produce higher cutting pressures, which may deflect the workpiece. They also use additional power. When dull tools are used on work-hardened materials, both the tool  and workpiece may be ruined. The speed of the cutter affects the surface finish of the workpiece. Too low a speed leaves a poor surface because of the buildup on the cutting edge. Too high a speed results in excessive tool wear.
When a carbide face mill is used, the color of the chips produced is an indicator of the machining conditions.
When steel is milled, chips should be straw colored or lightly blue. A dark blue to black color indicates that the surface speed is too high. When chips show no color, the surface speed is too low. If the feed is too low, the rubbing action wears down the cutting edge. If the feed is too high, the cutting edges will chip or break. Milling cutters often have high power requirements. It is good practice to calculate horsepower
needs before starting a cutting operation.
Unit 5 shows how these calculations are done.
When changing inserts, make sure that the seat and pocket for the insert are perfectly clean and not damaged. The most common reason
for a bad surface finish is improper mounting of the inserts. 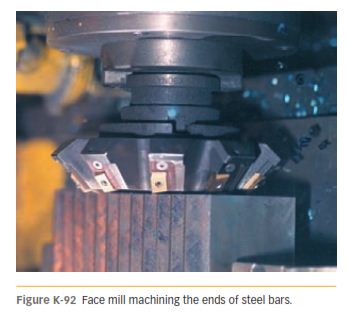 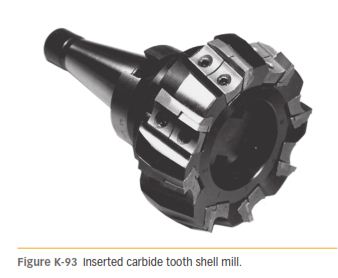 SETTING UP THE MILL