In addition to selecting objects by using a direct pick, you can select objects by using a rectangular selection window. To use a selection window at any Select objects: prompt, pick a point at a blank spot in the drawing area to define one corner of the window and then a second point to define the opposite corner.
Selection windows come in two styles: windows and crossing windows. When
you use a window selection, all objects must be entirely inside the boundary of
the window to be selected. When you use a crossing window, all objects entirely
within the boundary as well as any objects that cross the boundary are selected.
AutoCAD distinguishes the two types of selection windows visually. Window
selection areas are transparent blue and have solid boundary lines, and crossing
windows are transparent green with dashed boundary lines.
By default, window selections are used when the boundary is created from left to
right, and crossing selections are used when the boundary is created from right to
left. Releasing the left mouse button after you select the first corner will result in
a rectangular selection, whereas holding the left mouse button will allow you to
sketch a selection of any shape. By typing W↵ or C↵ at the Select objects:
prompt, you can override the direction default or create a selection window even
when the mouse is clicked as the cursor is over an object.
Selection windows can even be used to select objects to be trimmed or extended.
For instance, visualize a horizontal line with dozens of vertical lines crossing it,
and each of those lines must be trimmed back to the horizontal line. After designating
the horizontal line as the cutting edge, use a crossing selection window
to select all of the vertical lines on the trim side. All the lines are trimmed with
two picks instead of many.
In the Visual Effect Settings dialog box that opens (see Figure 4.78), you’ll see
settings in the Selection Area Effect section for controlling whether the selection
windows have color in them, which color will be in each window, and the
percentage of transparency of the colors. The left side of the dialog box controls
the appearance of an object’s highlighting when the cursor hovers over it.
Experiment with different settings. Click OK twice to return to your drawing,
and test the windows to see how they look. 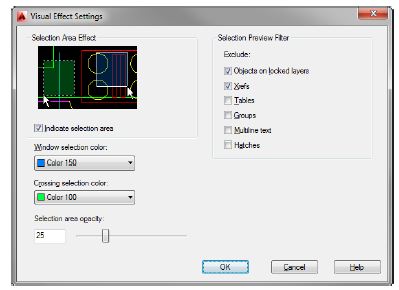 F igu re 4 . 7 8 : The Visual Effect Settings dialog box
This completes the doors for the floor plan. The focus here has been on walls
and doors and the strategies for drawing them. You now have a basic floor plan
for the cabin, and you’ll continue to develop this plan in the next chapter

Using the STRETCH Command to Size the Deck