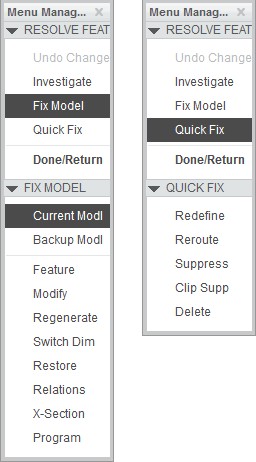 Figure 2 – Failure Diagnostics Window
Understanding Resolve Mode
If desired, you can activate Creo Parametric’s traditional Resolve mode upon
a regeneration failure. Resolve mode is a menu-manager driven system that
provides tools and diagnostics to resolve the current failure. You can activate
Resolve mode by editing preferences in the Regeneration Manager, or by
selecting the regen_failure_handling config.pro option.
The Resolve Mode Environment
When you activate Resolve mode, the following occurs:
• The Message Log displays a message about the failure.
• The failing feature and all subsequent features remain unregenerated and
therefore do not display.
• The Resolve menu appears, which uses the traditional menu manager
interface. The Resolve menu is shown in Figure 1. When using Resolve
mode, you must specify your intended action first, such as Modify (Edit) or
Redefine (Edit Definition), and then select an object, such as a feature or
component.
• The Failure Diagnostics window appears, providing you with information
about the failing feature. The Failure Diagnostics window is shown in
Figure 2.
• The option to Save is disabled until the failure is resolved.
The Failure Diagnostics window prominently displays in front of the graphics
window upon entering Resolve mode, and is one of the tools available
for resolving or preventing the regeneration problem that has occurred. It
displays the following options:
• Overview – Displays help information on the various Resolve mode tools.
• Feature Info – Displays the Feature Information for the failing feature
in the Web browser.
• Resolve Hints – If a resolve hint exists, the system displays this link. Click
the link for a suggestion on how to fix the problem.
Resolve Menu
The Resolve menu is another tool available for resolving or preventing the
regeneration problem that has occurred, and contains these main options:
• Undo Changes – Undo all the changes that caused the failure.
• Current Model/Backup Model – For both investigating and fixing the
problem, you can opt to work on the current (failed) model or the backup
model. The backup model shows all features in their pre-regenerated state,
and can be used to modify or restore dimensions of the features that are
not displayed in the current (failed) model. You can toggle back and forth
between the current and backup model.
• Investigate – Enables you to investigate the cause of the model failure.
You can list the changes made to items, show every object referenced by
the failed feature, report geometrical misalignments found during the last
regeneration, and roll the model back to a specified feature.
• Quick Fix – Enables you to fix the failing feature by performing standard
operations including Redefine, Reroute, Suppress, Clip Suppress, and
Delete. Reroute enables you to reroute the failing feature’s references to
prevent failures in subsequent features. Clip Suppress suppresses not only
the failing feature, but all subsequent features as well. Depending upon the
operation selected, the Undo Changes option may become unavailable.
• Fix Model – Enables you to fix other features in the model to resolve the
failing feature. Using fix model enables you to create, delete, suppress, or
redefine other features. It also enables you to modify the dimensions of
the other non-failing features in the model, as well as restore all modified
dimensions to their previous values. Again, depending upon the operation
selected, the Undo Changes option becomes unavailable.
You must click Regenerate in the menu manager after a change
is made to the model. While in Resolve mode, the regenerate
icon is disabled since the resolve menu contains Regenerate
in the menu manager.
• Yes / No– When you have fixed the regeneration failure using Resolve
mode, you can click Yes to exit Resolve mode and return to normal
operation. You can also click No to remain in Resolve mode if desired.