Another way you can make several objects act as one is to use the GROUP command.Groups differ from blocks in that they do not replace separate objects with a single definition but instead associate several objects by name so that they react as if they were a single object.
Selecting one member object from the group selects all the members. Unlike
objects in a block, members of a group can be added or removed, and you can toggle the group to allow the individual members to be selected. Use groups when you know that the association between the objects is not permanent, and use blocks when it might be.
The procedure for creating a group is as follows:
1. Make sure I07-03-InteriorDoor.dwg (M07-03-InteriorDoor.dwg)
is open.
2. Start the GROUP command by clicking the Group button on the Home
tab ➢ Groups panel.
3. Select the four rectangles that compose the closet door, as shown in
Figure 7.15. Do not press ↵ yet. 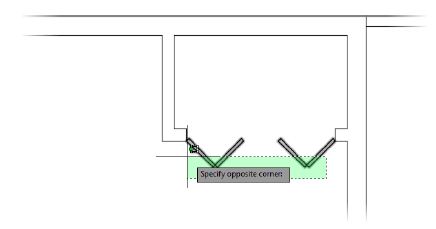 F igu re 7 . 1 5 : Selecting the closet door
4. With the closet door selected, enter N↵ or select New at the command
line to specify a name for your group.
5. At the Enter a group name: prompt, name your group CLOSETDOOR.
Press ↵ to define the group name.
The command line confirms the group creation: Group
“CLOSETDOOR” has been created.
6. Select any one of the four rectangles that define the closet door.
Although you selected only one door panel, all four door panels
are highlighted, and a bounding box defining the extents of your
CLOSETDOOR group is displayed along with a single grip at the
group’s centroid (see Figure 7.16). 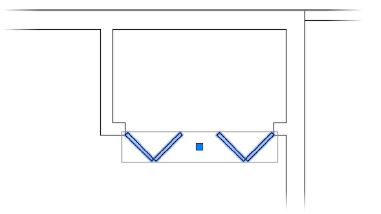 F igu re 7 . 1 6 : The CLOSETDOOR group in a selected state with a bounding box
and centroid grip

7. Click the Group Selection On/Off button on the Home tab ➢ Groups
panel to turn off group selection temporarily.
8. Select any one of the four door panels that define the closet door.
Because Group Selection is currently disabled, only the panel
you selected is highlighted (see Figure 7.17). In this state, you could
modify the polyline defining the door panel you selected as if it were
an ungrouped entity. 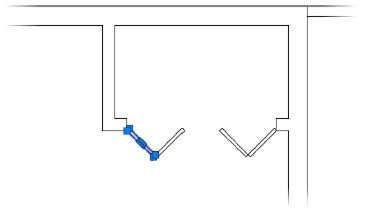 F igu re 7 . 1 7 : A single object in the CLOSETDOOR group selected with Group
Selection turned off
Groups are often used as a temporary drafting tool. As such, to
ensure that your AutoCAD drawings remain uncluttered and performing
at their best, you’ll want to dispose of unneeded groups
when you’re finished with them.
9. Click the Group Selection On/Off button once again, this time to
re-enable Group Selection. The Group Selection On/Off icon should
display with a blue background.
10. Select any one of the four door panels to select the CLOSETDOOR
group.
11. Click the Ungroup button on the Home tab ➢ Groups panel.
The CLOSETDOOR group is discarded, and the command line
reads Group CLOSETDOOR exploded

AutoCAD versions prior to the 2012 release included a limited subset of creation,
editing, and management tools; AutoCAD has included a Groups feature
for many releases. Despite these limitations, the Group object itself is the same
as it was in earlier versions, making it possible to exchange drawings freely with
groups between all recent AutoCAD versions.