Magnetic Chucks The most common work-holding device for the surface grinder is the magnetic chuck. The three types are the
permanent-magnet (Figure L-79), the electromagnet (Figure L-80), and the electro-permanent-magnet chuck.Permanent-magnet chucks, which are the most widely used chucks in the job shop setting, are composed of a series of alternating plates consisting of powerful magnets, with pole
pieces inside that can be moved to increase magnetic flux for firm work holding or to diminish magnetic flux to permit releasing the part. 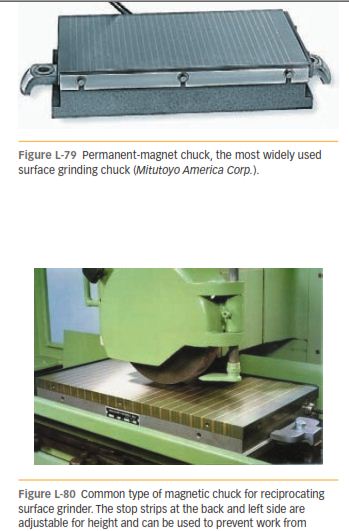 The electromagnetic chuck is magnetized when electrically energized. Because power is being continuously applied while the chuck is magnetized, heat is a byproduct. This can cause workpiece heating that can affect dimensions. In most cases, the grinding that is done on electromagnetic chucks is done with a substantial flow of grinding fluid, which carries away the generated heat.
Some electromagnetic chucks are constructed with internal fluid passages so that internal cooling can take place.
The chuck remains magnetized as long as the power is applied. When power is removed, the chuck is demagnetized so that the workpiece can be removed. However, some residual magnetism often remains in the workpiece and can make removal from the chuck difficult.
An electrical demagnetization process (degaussing) is used to remove any residual magnetism from the part.A series of magnetic reversals are
activated by a special switch. The process takes only a few seconds.
The third type of magnetic chuck, the electropermanent-magnet chuck, has distinct advantages in two important areas. The first is safety. If the power fails during grinding with an electromagnetic chuck, parts can be violently ejected from the chuck, which can endanger the operator, cause damage to the grinding wheel, and even cause spindle damage to the machine (if the part does not eject
cleanly). The electro-permanent-magnet chuck retains holding ability with or without electrical power.
Another advantage, especially for precision grinding, is that once the magnetism is established (which takes only a few seconds),
it is not necessary to apply additional energy to the chuck— which in a purely electromagnetic chuck could cause a temperature
rise of 30F to 40F. If, for some reason, grinding fluid as coolant is not being applied, this can result in unanticipated dimensional variation.
Alnico is used in these electropermanent-magnet chucks because it is easier to magnetize and demagnetize than the ceramic (ferrite) commonly used in permanent-magnet chucks. 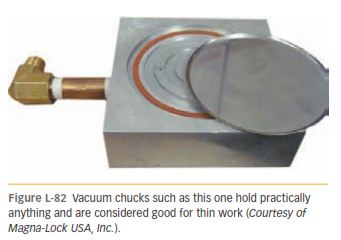 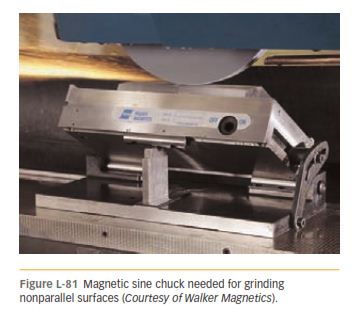 Magnetic chucks for surface grinders are usually rectangular.
Those for vertical spindle rotary grinders are circular.
Workpieces can be held on magnetic sine chucks for grinding
angles or compound angles (Figure L-81).
Vacuum Chucks The vacuum chuck (Figure L-82) is another popular tool for surface grinder work holding. The air under the workpiece is
evacuated, so that the force of atmospheric pressure holds the part on the chuck. This force can be quite significant. For example, on a 6- by 12-in. chuck, if the full surface was covered by the workpiece, the force of atmospheric pressure would be over 1000 lb. Vacuum chucks are also useful for holding thin workpieces. Substantial care is needed in setting up a vacuum chucking operation to ensure the best possible
holding of the workpiece.

WORK HOLDING ON THE VERTICAL MILL