Fused Aluminum Oxide
Fused aluminum oxide is the most widely used abrasive in manufacturing. The higher the level of purity, the more friable (less tough) the grit becomes.
The purer grades are often white in color and are used mainly on hardened steels.
The grinding of hard steel causes a fairly rapid breakdown of the individual grains to expose new sharp edges. A sharp wheel cuts easily, with less heat being produced. Less pure aluminum oxide usually is gray in appearance. It has a tougher grain structure that resists fracturing, and it is better for applications such as off-hand grinding on a pedestal grinder.
For extremely harsh applications, such as snagging in foundries, a crystalline combination of aluminum and zirconium oxide has been developed that results in a tough abrasive. Although aluminum oxide works well on steels, it can work poorly on cast iron, apparently because the aluminum oxide is somewhat soluble in cast iron at the high temperature of grinding. The wheel dulls quickly, probably because the sharp edges dissolve away into a solid solution with the iron.
Ceramic Aluminum Oxide
Ceramic aluminum oxide is produced by a process similar to growing crystals in a supersaturated solution. This method permits engineering the crystal shape for specific purposes.
Wheels made of pure ceramic aluminum oxide as the abrasive component are suitable for rough grinding but are unsuitable for precision grinding.
By combining ceramic aluminum oxide with fused aluminum oxide, a wheel can be produced that has a combination of sharpness, aggressive
cutting action, form retention, and resultant long life between dressings, resulting in a three- to five-fold improvement in grinding ratio over straigh fused aluminum oxide grinding wheels.
Collectively, aluminum oxide products are used in nearly three quarters of abrasive applications.
Silicon Carbide 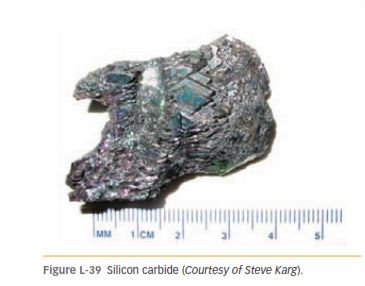 Silicon carbide (Figure L-39) is a somewhat harder abrasive than aluminum oxide but has a sharper, more friable, and
quite brittle crystalline structure. It works well on cast iron and nonferrous materials such as aluminum- and copperbased
alloys.
It also works on carbide cutting tools, but not nearly so well as the cooler-cutting diamond abrasives, which have largely replaced silicon carbide for this application.
Silicon carbide is useful in grinding many titanium alloys as well as austenitic stainless steels.
Cubic Boron Nitride

Cubic boron nitride (CBN) (Figure L-40) is much harder than silicon carbide. This abrasive, which is called
Borazon , was created by the General Electric Co. in the late 1950s. It was introduced as a commercial product in 1969. It
works best on hardened ferrous alloys, especially the difficultto-machine cobalt and nickel superalloys used widely in jet engine applications.
Until 1981, this abrasive was available only as a cubic single-crystal structure that would fracture only as large grains of the crystal (macrofracture). For this reason, most applications were for roughing, and only in materials harder than Rockwell C50. A microcrystalline version introduced in 1981,also known as polycrystalline cubic boron nitride (PCBN), microfractures in micron-sized (.0000394-in.) particles to produce new sharp edges. This newer form is also capable of operating at a much higher temperature than the original form. Like most milling chips, the chips produced by this superabrasive are well formed.
This sharp cutting action results in a much cooler operating temperature, which is important in the grinding of heatsensitive materials.
At high temperatures CBN tends to react with water; hence CBN was initially applied with straight oil cutting fluids. Recent developments in water-based fluids have improved the CBN grinding ratio in these fluids to approach that of straight oil cutting fluids.
CBN is not competitive with diamond in the grinding of tungsten carbide, however. The abrasive is up to 200 times more expensive than either aluminum oxide or silicon carbide.
Machine requirements are also rigorous. However, time saved from faster cutting action, less dressing, consistent size control,and less-frequent wheel changing often makes cubic boron nitride the least expensive abrasive per part produced.
Diamond

Diamond (Figure L-41) is another superabrasive obtained in either natural or manufactured form. It is the hardest substance
known.
The single-crystal diamond nib used for the truing and dressing of grinding wheels is a common application.
For several economic and strategic reasons, there was great interest in the development of synthetic diamond. This feat was accomplished by the General Electric Company in the early 1950s. The first commercial marketing came in 1957. Today, most diamonds used in precision grinding applications are manufactured.
Manufactured diamonds are engineered to have controlled crystal configurations not duplicated in natural diamonds.
Diamond abrasive is especially useful in the grinding of ceramics and tungsten carbide. Diamond abrasives are not effective on steels or superalloys containing cobalt or nickel.
At the elevated operating temperature of grinding these materials, they readily pick up carbon from diamond.
Diamond grinding wheels are especially useful in sharpening carbide cutting tools.
Because grinding shank-mounted carbide tools frequently includes grinding some of the supporting steel,special metallic coatings on the diamonds do permit diamond wheel use for this application.

Because of the cost of diamond, its use is usually restricted to those applications where no other abrasive will work effectively. However, the same economic reasoning is applied to diamond tooling as to cubic boron nitride. If using diamond costs less per part, it should be the preferred tool for that operation.

OTHER FACTORS IN WHEEL SELECTION

TOWARD A SCIENCE OF GRINDING