TOOLHOLDING FOR THE LATHE TAILSTOCK 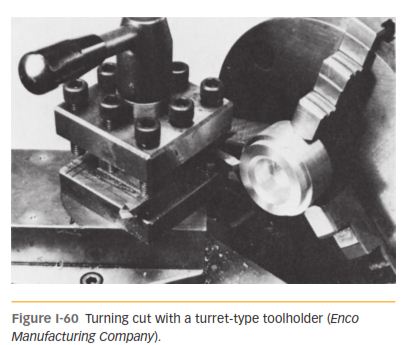 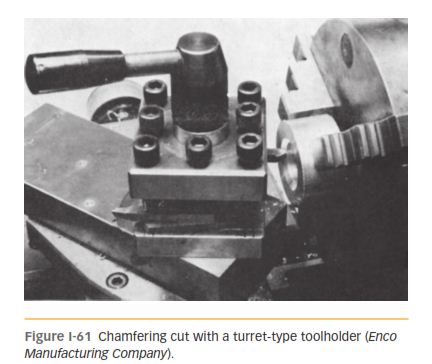 The toolholders studied so far are all intended for use on thecarriage of a lathe. Toolholding is also done on the tailstock. 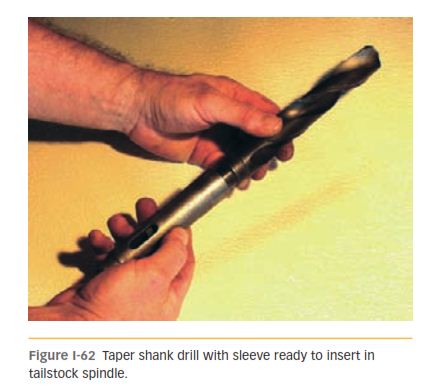 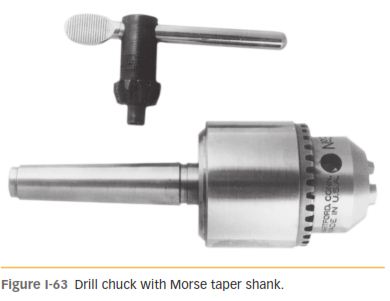 Figure I-62 shows how the tailstock spindle is used to hold Morse taper shank tools. One of the most common toolholding devices used on a tailstock is the drill chuck (Figure I-63). A drill chuck is used for holding straight shank drilling tools. When a series of operations must be performed and repeated on several workpieces, a tailstock turret (Figure I-64) can be used. The illustrated tailstock turret has six tool positions, one of which is used as a workstop. The other positions are for center drilling, drilling, reaming, counterboring, and tapping. Tailstock tools are normally fed by turning the tailstock handwheel. 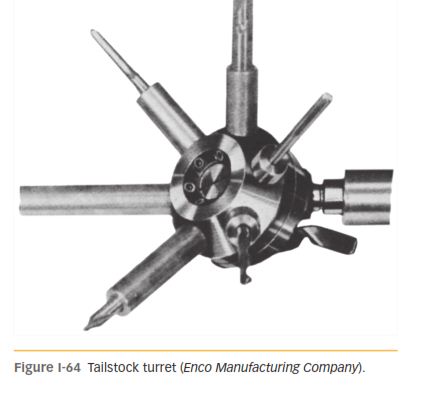 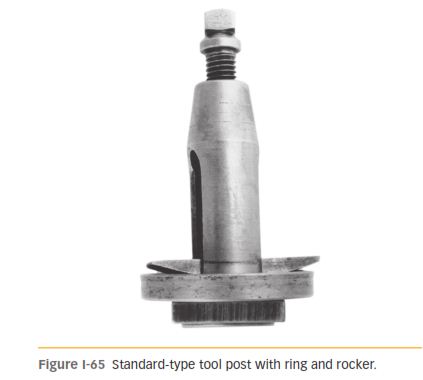 Figure I-64 Tailstock turret (Enco Manufacturing Company). An older-type tool post is shown in Figure I-65. These so-called standard tool posts are now obsolete but are still used on some older lathes and are still in use in some school shops. For this reason, they are included here. The two greatest disadvantages are their lack of rigidity and the tendency of the toolholder to turn in the toolpost and the tool to gouge the workpiece. Tool height adjustments are made by swiveling the rocker in the tool post ring. Making adjustments in this manner changes the effective back rake angle and also the front relief angle of the tool.

Many types of toolholders are used with the standard tool post. A straight shank turning toolholder (Figure I-66) is used with high-speed tool bits. The tool bit is held in the toolholder at a -degree angle, which provides a positive back rake angle for cutting. Straight shank toolholders are Offset toolholders (Figures I-68 and I-69) allow machining close to the chuck or tailstock of a lathe without tool post interference. The left-hand toolholder is intended for use with tools cutting from right to left or toward the headstock of the lathe.

A toolholder should be selected according to the machining to be done. The setup should be rigid, and the toolholder overhang should be kept to a minimum to prevent chattering. A variety of cutoff toolholders (Figure I-70) are used to cut off or make grooves in workpieces. Cutoff tools
are available in different thicknesses and heights. Knurling tools are made with one pair of rollers (Figure I-71) or with three pairs of rollers (Figure I-72) that make three different kinds of knurls. These toolholders as shown in Figures I-65 through Figure I-72 and the so-called standard tool post are still used on some small lathes but are obsolete in manufacturing and industry. 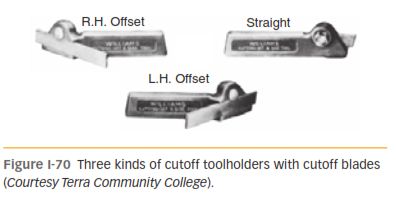 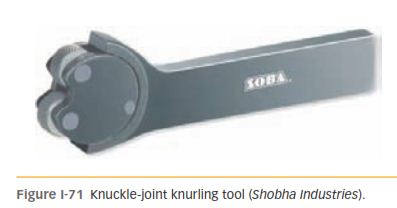 Small boring bars can be either the inserted tool type (Figure I-73) or the form-relieved interchangeable cutter head (Figure I-74). The boring bar tool post (Figure I-75) can be used with different boring bar sizes. Another 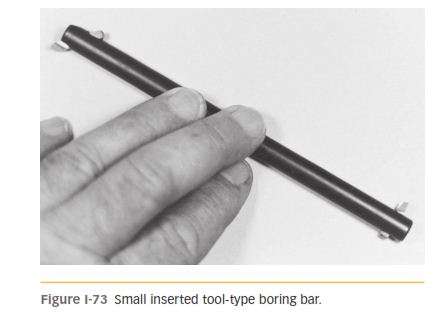 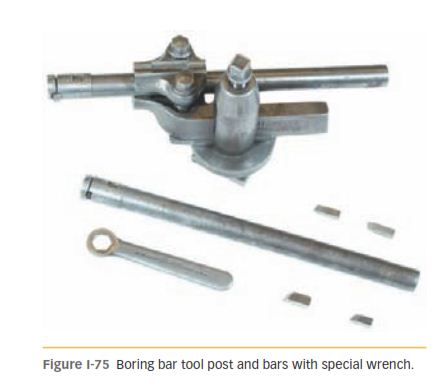 TOOLHOLDING FOR THE LATHE CARRIAGE