One of the considerations in threading is the lead-in and ending of a thread (Figure M-69). When the threading operation begins, the spindle is rotating at the correct spindle speed, but the tool is not moving. Distance A, or at least part of it, is traveled while the feed rate is accelerating from zero to a feed rate equal to the lead of the thread. During this accelerating period, the lead or pitch of the thread is
incorrect. Distance B represents the thread with the desired correct lead. C is the ending of the thread. A portion of this distance happens during the deceleration of the feed rate to zero. This also produces an incorrect thread lead. The programmed length of the threading move has to compensate for this lead error. 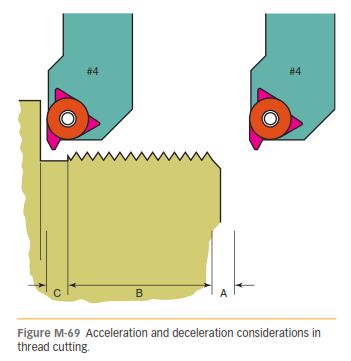 The length of this lead error is affected by the spindle speed.
A higher rpm will result in a longer lead error distance than a slower rpm would for the same number of threads per inch machined. The programmer needs to know the exact dimensions of the threading tool tip. In Figure M-70 the tool is advanced in both the X and Z
axes by each depth-of-cut increase, which brings the tool closer to the shoulder with each cut.
Controllers usually give varying choices in selecting threading patterns. These can vary from straight plunging cuts, where the tool point cuts with both the cutting edges at the same time. With the chips converging at the point, the surface finish of the thread is often rough and not
acceptable. Figure M-70 shows a pattern where the in-feed is done at 30 degrees with only one cutting edge making a chip. Much less heat and pressure is generated, with a resulting better surface finish.

Only the final pass is a straight infeed.
This will give clean thread flanks on this cleanup pass.
Another threading pattern is a zigzag tool movement. As the name implies, the tool cuts alternately with the left and then with the right cutting edge. This also increases tool life and results in a better surface finish. Table M-2 gives the constants for calculating distances A and C in Figure M-70.
Table M-2 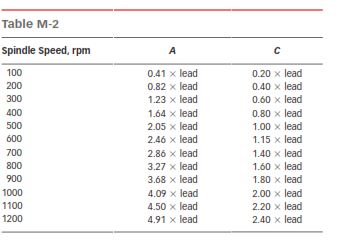 The dimensions for A and C in Figure M-69 are calculated as follows: 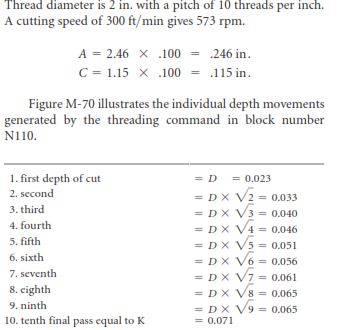 The Table on p. 699 is a programming example for Figure M-71 thread only. Because the programmed D value determines successive cutting in-feeds, changing this dimension will also change the total num