You can rename objects with more descriptive names so that
they are easily recognized in the model tree.
• Objects that can be renamed
include:
– Features
– Components 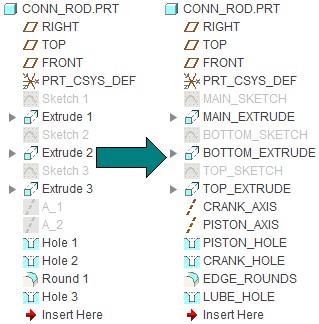 Figure 1 – Features Before and
After Rename

Figure 3 – Connecting Rod
Renaming Features
When you create a feature in a part model, it is automatically assigned a
generic name based on its type. For example, the feature may be called
Sketch 1 or Extrude 2, or Revolve 3. While these names describe the type of
feature, they do not describe what the feature is in the context of the design.
Consequently, it can be helpful to rename the feature to something more
descriptive. Figure 1 shows the model tree before and after feature renaming
has occurred. You can see that the model tree is more intuitive once the
features have been renamed with more descriptive names. As a result, it is
much easier to find a feature when it needs to be edited.
You can rename model features by using any of the following methods:
• Select the feature in the model tree or graphics window, then right-click and
select Rename from either the graphics window or model tree.
• Select the feature to be renamed in the model tree. Once selected, select it
again from the model tree.
Names can contain up to 31 characters and may not include spaces.
Module 5 | Page 2 © 2012 PTC
For PTC Internal Use Only
Renaming Components
To avoid assembly failures, you must rename components within the context
of the assembly instead of using Windows Explorer to rename components
on the hard drive.
You can rename components by using either of the following methods:
• Rename on disk and in session – The system renames the component
both in system memory and on the hard drive.
• Rename in session – The system renames the component only in system
memory.
Click File > Manage File > Rename from the File menu to rename
components. Within the Rename dialog box, as shown in Figure 2, you
can click Commands and Settings
, and then select the component to
be renamed from either the model tree or graphics window. You can also
rename the assembly in the Rename dialog box. Notice that the assembly is
the default item to be renamed when this dialog box appears