Consider a blank sheet of paper on the desk before you and imagine that you wish to define specific locations on the paper relative to the center of the sheet. You could start by drawing a vertical and a horizontal line on the paper and identifying these by the letters X and Y (Figure M-24). These reference lines are called the X axis and the Y axis. The X axis is the horizontal line, and the Y axis is the vertical line. The
X and Y axes cross each other at a right angle in the center of the paper. This point of intersection is called the origin.If you assign a set of equally spaced graduations to the X and Y axes starting at the origin and going in both directions, left and right and up and down, points along each axis may be established.

The origin, or the point at which the X and Y axes cross, is assigned a numerical value of zero. Graduations on the X axis to the right of zero are positive values. Graduations on the X axis to the left of zero are negative values. Those up or out from the Y axis are positive, and those down or in the Y axis from zero are negative. By drawing parallel lines to the X and Y axes through each increment point as marked along each axis, a grid system is established. Where each perpendicular grid line intersects another perpendicular grid line, an intersection
or grid point is established.
This point is identified by its X and Y value. For example, in the illustration, grid intersection 3,5 identifies that point in terms of its distance from the origin along each axis. This point is 3 graduations out the X axis in a plus direction and 5 graduations up the Y axis in a plus direction. The point is identified by its rectangular coordinate location of 3, 5 on the plane. The location 3, 5 is called an ordered pair, and when it is written, the X value is always first, followed by the Y value (X, Y or 3, 5).
The X and Y axes form the four quadrants or quarters identified by the Roman numerals I, II, III, and IV. 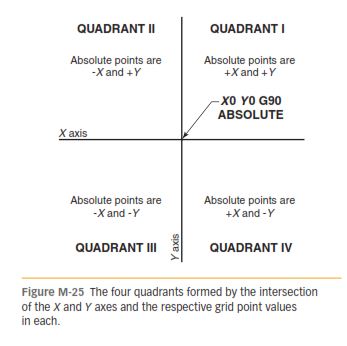 In quadrant IV, point values are and (Figure M-25). Points defined in this manner are said to be defined by their rectangular coordinates because they form the corners of rectangles, with the origin forming the opposite corner (Figure M-26). Math books may refer to this method of point definitions as Cartesian coordinates. 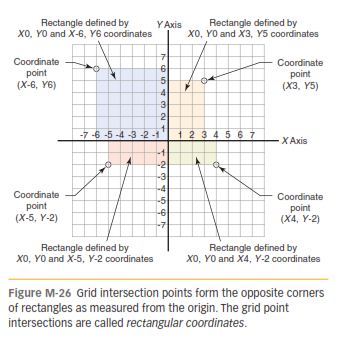 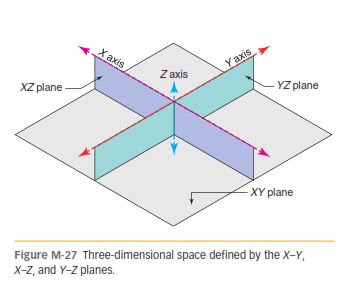 When a third axis, the Z axis, is added perpendicular to the plane, points may now be defined in a threedimensional volume of space (Figure M-27). This permits the CNC programmer to define points in three dimensions from the origin. Tool motion and workpiece positioning
may then be defined in two other planes formed by the X and Z and Y and Z axes. Now, the programmer is not restricted by only the two dimensions of the plane.X–Y The programmer can now define points and motions in three dimensions, making possible the machining of
complex three-dimensional contours on parts. Z-axis points become the third entry when defining coordinate locations.
For example, a notation of corresponds to the values of X 4, Y 3, and  Z -6. 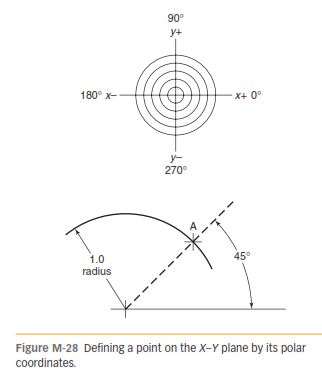 Another method of defining point locations on a plane is with polar coordinates (Figure M-28). With rectangular coordinates,
points are defined by their linear distance as measured parallel to the fundamental axis from the origin. In polar coordinates, points are defined by their rotational angular position from the reference axis and by the radial distance from the origin. In CNC programming,
it may be necessary to convert polar locations to rectangular locations to define tool and workpiece positioning.
This topic will be developed in more detail in the programming unit.

You should now be familiar with the three fundamental axes of a three-dimensional volume of space, in which a CNC machine tool may position cutting tools and workpieces. Next is to see how these axes are applied to CNC machine tools.Every machine tool has two or more major components that move at right angles to each other. A vertical spindle machining center, for example, has a table that moves right
and left, a saddle that moves in and out, and a toolhead with a spindle that moves up and down. The horizontal spindle machining center has a table moving right and left, a toolhead moving up and down, and a spindle moving in and out. The CNC turning center has a cross slide moving at right angles to the ways and spindle axis, tooling turrets, and possibly a tailstock. 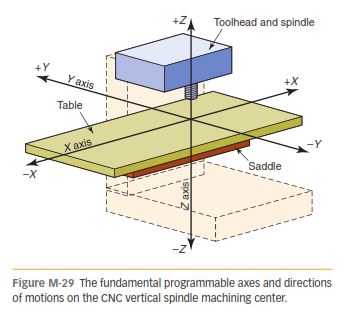 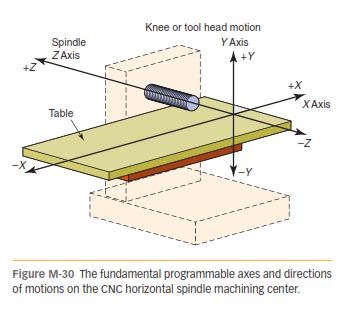 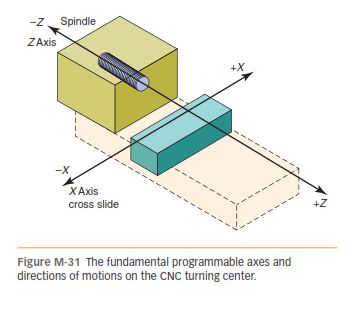 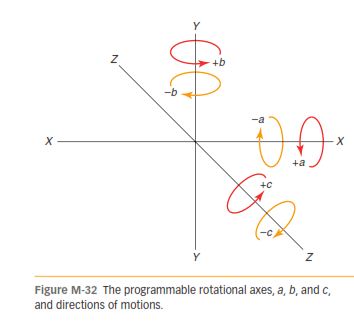 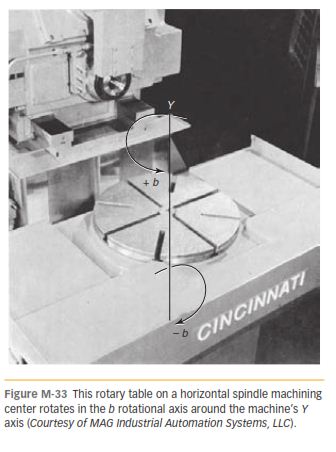 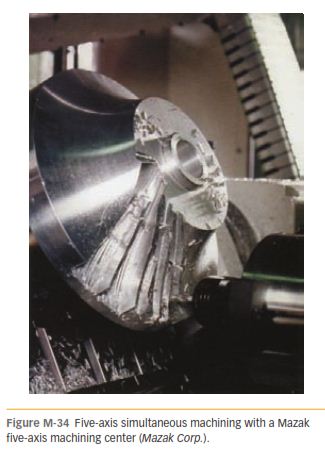 About the MDDs and the MDD Editor gibbscam