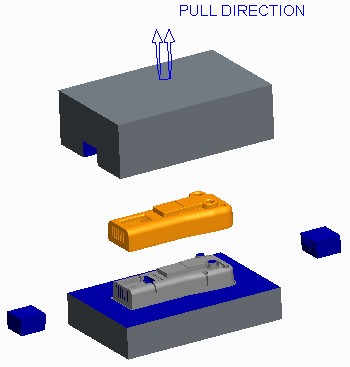 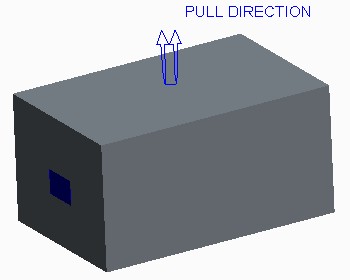 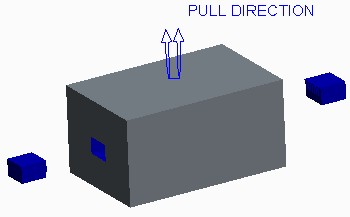 Figure 3 – Partially Open Mold
Opening the Mold
You can simulate the mold opening process to determine whether your final design matches your original design intent. The mold opening process is a series of steps, containing one or more moves. You can specify moves for any component, or member, of the mold model except the reference model and the workpiece. It is convenient to blank the reference model, workpiece, and all mold volumes, as well as the parting lines and surfaces before opening the mold.
In order to simulate the mold opening process, you must define the following:
• Define Move — An instruction to move one or more members of the mold model. When defining a move, you must specify the following items:
– The members to be moved.
– The direction reference of the movement. You can select a linear edge, axis, or plane to indicate the direction. When the direction reference is specified, an arrow indicates the positive direction.
– The offset value. The members move the amount specified in the direction of the reference specified. The members move parallel to the
edge or axis, or normal to the plane. You can specify a positive offset value or a negative offset value to move the member in the opposite
direction.
• Define Step — A collection of defined moves for opening the mold.
You can also perform the following operations on the mold opening simulation:
• Delete — Enables you to delete an existing step.
• Delete All — Enables you to delete all existing steps.
• Modify — Enables you to modify an existing step by adding or deleting moves from the step.
• Modify Dim — Enables you to modify the offset value of a given move. You must regenerate the mold model in order for the new value to take effect.
• Reorder — Enables you to switch the order of existing steps. You can specify the step you want reordered, then select the step that you want it
to become.
• Explode — Enables you to simulate the mold opening by stepping through the sequence, in order, one step at a time. Members included in the moves of the step are translated according to the specified offsets. You can continue to step through all the steps in the sequence. A message in the message window indicates when all components in the mold model have been successfully exploded. You can also animate the entire opening sequence.
Rules for Defining a Move
You must remember the following rules when defining moves:
• Each step may contain several moves that are performed simultaneously.
• A member can be included in only one move per step.
• A move may contain several members, but they are all offset in the same direction and by the same value

Direction Patterning in the First Direction