You can now mirror the post and railing to draw them on the opposite side of
the stairway. You can’t use the midpoint of the deck’s perimeter line as one
point of the mirror line, because the stair is centered on the front door and not
on the deck. You can, however, use the midpoint of the front door’s threshold.
Follow these steps:
1. Make sure I05-06-DrawStairRail.dwg (M05-06-DrawStairRail.dwg)
is open.
2. Select the 4″ (102 mm) post and all three lines that make up the
handrail. Try using a window selection (drag from left to right) to
select the objects rather than picking them one at a time.
3. Start the MIRROR command.
4. Use the Midpoint osnap, and then specify the midpoint of the vertical
threshold line as the first point of the mirror line, as shown in
Figure 5.21. 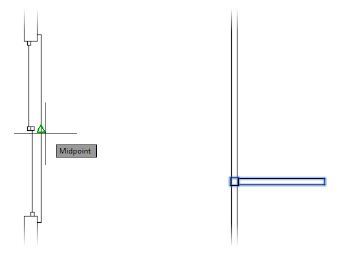 F igu re 5 . 2 1 : Using the midpoint of the threshold as the first mirror point
5. Move the cursor to the right, and then click to specify the second
point of the mirror line. Press ↵ to retain the source objects. 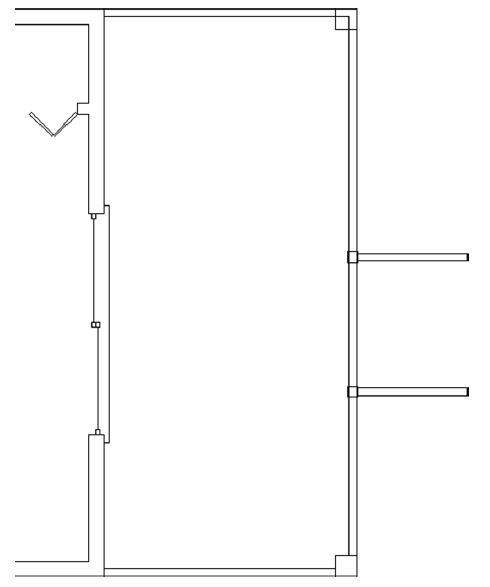 F igu re 5 . 2 2 : The deck with both handrails
6. Zoom in until you can see both stair handrails and posts.
7. Break the outside perimeter line of the deck into individual line entities
by using the EXPLODE command.
8. Start the COPY command from the Home tab ➢ Modify panel. Select
the outside perimeter line of the deck to begin building the stairs.
9. Pick any point near the stairs at the Specify base point: prompt.

10. Enable the Array option of the COPY command by entering A↵ at the
Specify second point: prompt.
11. Use the following values to complete the array:
a. Enter 5↵ at the Enter number of items to array: prompt.
b. Move your cursor directly to the right, and enter 10↵ (254↵) at
the Specify second point or: prompt (see Figure 5.23). 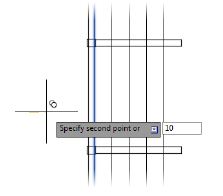 F igu re 5 . 2 3 : Using the Array option of the COPY command to create stairs
for the deck
12. Verify that the preview looks like Figure 5.24, and then press ↵ to
accept the array. The COPY command ends, and your stairs are drawn.

F igu re 5 . 2 4 : The stairs created using the COPY command
Now you will use the TRIM command to trim away the stair lines
that extend into and beyond the railings and the lines that pass
through the 4″ (102 mm) posts.

13. Start the TRIM command. Select both of the inside lines of the stairway
handrails and the 4″ (102 mm) post polylines as the cutting-edge objects.

14. Trim the four stair lines on both sides of the railing.
15. Of the two vertical lines that extend between the two posts, trim only
the left vertical line.
16. Trim away the four short lines that pass through the two 4″ (102
mm) posts, and erase the additional line along the inside perimeter.
When complete, your front stairway should look like Figure 5.25. 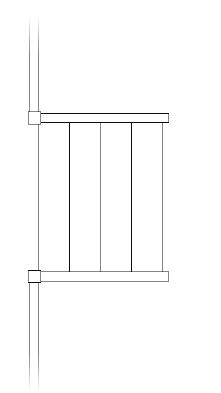 An Addition to the Cabin