Home / Autocad Tutorial / Making a Block for a Door

Making a Block for a Door

In general, objects that are best suited to becoming part of a block are the
components that are repeatedly used in your drawings. In architecture and
construction, examples of these components are doors, windows, and fixtures;
or drawing symbols, such as a North arrow; or labels for a section cut line (as
shown in the examples in Figure 7.1). In mechanical drawings, these can be
countersunk and counterbored holes, screws, bolts, fasteners, switches, or any
other objects that you find yourself repeatedly drawing.
In your cabin drawing, you’ll convert the doors with swings into blocks. You’ll
then create a new block that you’ll use to place the windows in the cabin drawing.
To accomplish these tasks, you need to learn two new commands: BLOCK
and INSERT. 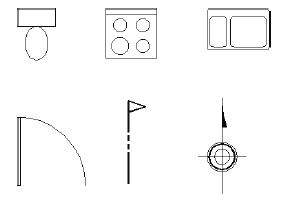 F igu re 7 . 1 : Examples of blocks often used in architectural drawings
When making a block, you create a block definition. This is an entity that is
stored in the drawing file and consists of the following components:
▶▶ The block name
▶▶ An insertion point to help you place the block in the drawing
▶▶ The objects to be grouped into the block
You specify each of these in the course of using the BLOCK command. When
the command is completed, the objects are designated as a single block, and the
block definition is stored with the drawing file. You then insert additional copies
of the block into the drawing by using the INSERT command

Although it’s technically possible to create blocks on any layer of your choice,
the generally accepted best practice is to always define blocks that are to be used
as symbols in a drawing on layer 0. It is also recommended that the color, linetype,
and lineweight of each be set to ByLayer or ByBlock. Drawing your blocks
with these properties in mind allows you to manage their appearance in the
same way as other linework in your drawing. Objects on other layers retain the
properties of their original layers, regardless of which color or linetype has been
assigned to the current layer. This is one characteristic that distinguishes layer 0
from all other layers.
To get started, you’ll see how to create blocks from objects already in your
drawing. You’ll create a block for the back exterior door and call it A-DOOR-
36IN to match the NCS naming convention used throughout this book. For the
insertion point, you need to assign a point on or near the door that will facilitate
its placement as a block in your drawing. The hinge point makes the best insertion
point.
For this chapter, the Endpoint osnap should be running most of the time, and
Polar Tracking should be off. Follow these steps to set up your drawing:
1. Continue using the I06A-FPLAYO.dwg (M06A-FPLAYO.dwg) drawing
you created in Chapter 6, “Using Layers to Organize Your Drawing.”
If you’re starting a new session, you can download this file from the
book’s website at www.sybex.com/go/autocad2015ner or from www
.thecadgeek.com.
2. Click the Layer drop-down list, and click the sun icon for the
A-WALL-HEAD layer to freeze it.
3. Click the A-DOOR layer to close the list.
The A-DOOR layer is now current, and the sun next to the A-WALLHEAD
layer turns into a snowflake. In addition to the A-WALL-HEAD
layer, the A-FLOR-FIXT and A-ROOF layers should still be frozen from
Chapter 6 (see Figure 7.2). F igu re 7 . 3 : The Block Definition dialog box
3. Click the Pick Point button in the Base Point group of the Block
Definition dialog box.
The dialog box temporarily closes, and you’re returned to your
drawing.
4. Use the scroll wheel on the mouse to zoom in to the back door area in
your drawing.
5. Move the cursor to the back door area, and position it near the
hinge point of the door. When the Endpoint marker appears on
the hinge point (see Figure 7.4), click. 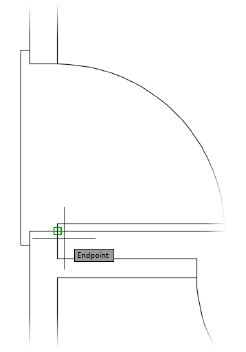 F igu re 7 . 4 : The back door opening when the hinge point is picked as the
insertion point
This selects the insertion point for the door, and the Block
Definition dialog box returns. The insertion point is the location,
relative to the cursor, that the block references when it is inserted.
6. Click the Select Objects button in the Objects group of the Block
Definition dialog box.
You’re returned to the drawing again. The cursor changes to a pickbox,
and the command-line interface displays the Select objects:
prompt.
7. Select the door and swing, and then press ↵.
You’re returned to the Block Definition dialog box.
8. At the bottom of the Objects group, the count of selected objects
appears. Just above that are three radio buttons. Click the Delete
radio button if it’s not already selected.

The Delete option erases the selected objects after the block definition
is created, requiring you to insert the block into the drawing.
The Convert To Block option replaces objects with a block definition
as soon as the block is created. In this situation, the Convert
To Block option would be a better choice, but it’s a good idea to get
some practice using the INSERT command, which is why you selected
Delete at the beginning of this step.
9. Enter a description of the block in the Description field, and make
sure Inches (or Millimeters) is specified in the Block Unit drop-down
list, depending on the units you are using.
The Block Definition dialog box should look similar to Figure 7.5. 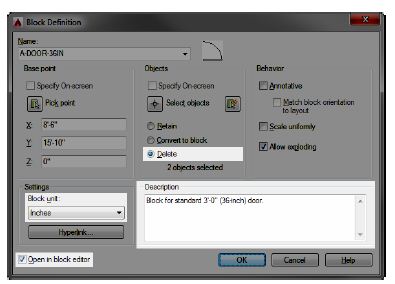 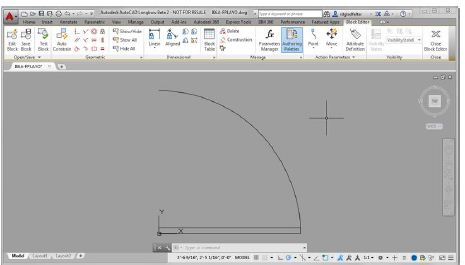 F igu re 7 . 6 : The Block Editor displaying the A-DOOR-36IN (A-DOOR-0915)
block
Because the objects, in this case the door and swing, used to create
the A-DOOR-36IN (A-DOOR-0915) block were drawn on the A-DOOR
layer, the objects within the block are also on that layer. As discussed
earlier, the preferred practice is to define blocks such as this one on
layer 0 so that they’re easier to manage.
11. Select the door and swing inside the Block Editor, and change its
layer to layer 0 by using the Layer drop-down on the Home tab ➢
Layers panel (see Figure 7.7). 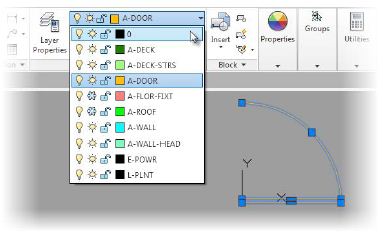 F igu re 7 . 7 : Changing the door’s layer inside the Block Editor

12. Click the Close Block Editor button found on the contextual Close
panel appended to the end of any Ribbon tab.
13. If prompted, choose Save The Changes To A-DOOR-36IN (A-DOOR-0915)
from the Block – Changes Not Saved dialog box, as shown in Figure 7.8. F igu re 7 . 8 : Choosing to save changes from the Block – Changes Not Saved
dialog box
14. Save your drawing as I07-01-DoorBlock.dwg (M07-01-DoorBlock.dwg)
by choosing Application menu ➢ Save As ➢ AutoCAD Drawing.
You have now created a block definition called A-DOOR-36IN (A-DOOR-0915).
Block definitions are stored electronically with the drawing file. You need to
insert the A-DOOR-36IN (A-DOOR-0915) block (known formally as a block reference)
into the back door opening to replace the door and swing that were just
deleted when the block was created.

Using the Properties Palette to Examine a Block

Using the Current Layer as a Drawing Tool