The lathe spindle nose is the carrier of a variety of workholding devices fastened to it in several ways.

The spindle is hollow and has an internal Morse taper at the nose end,which makes possible the use of taper shank drills or drill chucks (Figure I-107). This internal taper is also used to hold live centers, drive centers, or collet assemblies. The outside of the spindle nose can have either a threaded nose (Figure I-108), a long taper with key drive (Figure I-109), or a camlock (Figure I-110). 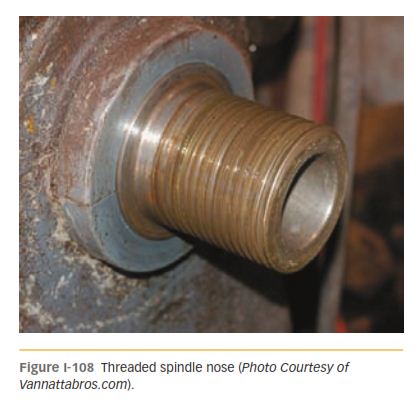 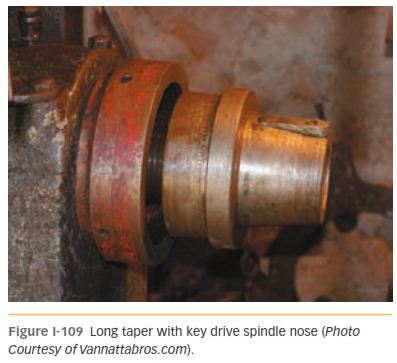 Threaded spindle noses are mostly used on older lathes. The chuck or face plate is screwed on a coarse right-hand thread until it is forced against a shoulder on the spindle that aligns it. Two disadvantages of the threaded spindle nose are that the spindle cannot be rotated in reverse against a load and that it is sometimes difficult to remove a chuck or face plate (Figure I-111). 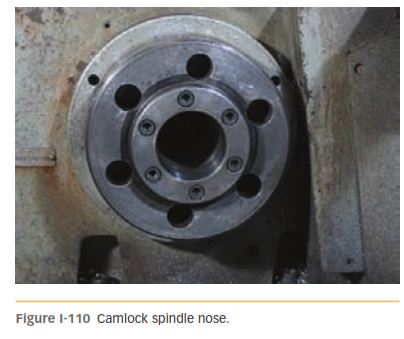 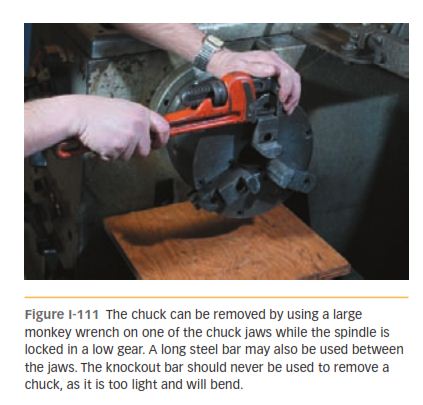 The long taper key drive spindle nose relies on the principle that a tapered fit will always repeat its original position. The key gives additional driving power.A large nut having a right-hand thread is turned with a spanner wrench. It draws the chuck into position and holds it there.  Camlock spindle noses use a short taper for alignment. Studs arranged in a circle fit into holes in the spindle nose. Each stud has a notch into which a cam is turned to lock it in place. All spindle noses and their mating parts must be carefully cleaned before assembly. Small chips or grit will cause a work holding device to run out of true and be damaged. A spring cleaner (Figure I-112) is used on mating threads for threaded Figure I-111 The chuck can be removed by using a large monkey wrench on one of the chuck jaws while the spindle is locked in a low gear. A long steel bar may also be used between the jaws. The knockout bar should never be used to remove a chuck, as it is too light and will bend. 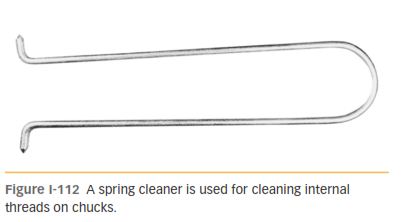 Figure I-112 A spring cleaner is used for cleaning internal threads on chucks.spindles. Brushes and cloths are used for cleaning. A thin film
of light oil should be applied to threads and mating surfaces.

TOOLHOLDING FOR THE LATHE TAILSTOCK

TOOLHOLDING FOR THE LATHE CARRIAGE