ArtCAM JewelSmith is a complete 3D design and manufacturing solution. Based on the ArtCAM Pro framework, JewelSmith provides further tools specifically for Jewellery designers and manufacturers.

With ArtCAM JewelSmith a wide range of complex 3D rings, pendants and other items of jewellery can be generated. These items can be machined rotary, flat or inside or by a combination to produce the finished wax model. They can be displayed in a variety of metals with the gemstones to show the final piece.

To allow greater freedom and complex 3D design, ArtCAM JewelSmith adopts a unique process of model making, where by all associated files or components are created and stored within a single Project folder. When this project is initially created, a 3D master model file (* 3DP) is also created. The Master model file can be best described as a repository for all the finished components. Each component within this master model file can then be freely positioned, combined and manipulated (e.g. shaded, scaled) in 3D space.

Each of these components is known as a 3D assembly (*3DA) and is created as a triangular mesh replica from the conventional ArtCAM model (*.art).

Any number of these 3D assemblies can be contained within the 3D master model.

The main advantage of using this system of creating and storing is that it allows assembly of separate components. For example, gems, settings and a ring shank can be created separately but then assembled in the master model to create a finished piece. This finished piece can then be machined as a whole using the powerful Multi-Sided Machining Wizard. 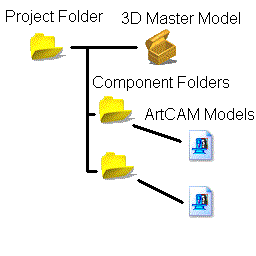 When a JewelSmith project is created, a new folder is created on your computer.

This folder contains the master model (called *.3DP) and component folders for each part of the Master model.

ArtCAM Reliefs (3D Models) are created from 2D vectors or bitmaps. These vectors (2D artwork) and bitmaps (images) can be generated within ArtCAM or imported from other systems. ArtCAM can import 3D models and generate reliefs from them. When dealing with bitmaps and Reliefs it is important to understanding Resolution, which will influence the overall surface detail of the relief and ultimately the final piece.

The dragon model shows the 2D view of the model broken up into a number of squares (pixels). Each square is given a height in ArtCAM dependent upon the command used.  The first relief uses a low resolution, which means a loss of fine detail in the resulting 3D relief.

If a higher resolution is chosen, the model is broken into many more pixels and therefore the fine detail can be shown in the relief.

Note: The trade-off with having a high resolution can normally result in larger file sizes, calculation and machine cutting times. 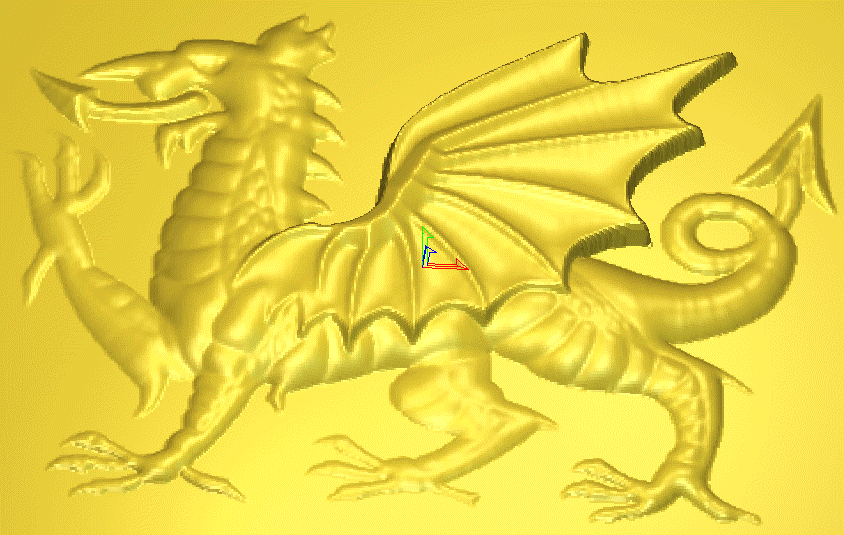 The final stage for most ArtCAM Projects is to manufacture the 3D relief as a real object. Currently there are two major routes to production: via CNC machining or Rapid Prototyping. JewelSmith can realise its models using either method.

JewelSmith can calculate the toolpaths required to machine the individual relief or final assembly. The calculated toolpaths can be then sent directly to the machine (via post-processing) ready for cutting.

Most Rapid Prototyping machines require a specific type of 3D model. These models are made up of a small triangular mesh, which defines its whole surface shape. This type of file is commonly known as an STL, file format. ArtCAM JewelSmith allows you to export the final assembly or relief in the STL format, ready for manufacture.