The major assemblies of the vertical milling machine are the
base and column, knee and saddle, table, ram, and toolhead
(Figure J-3). 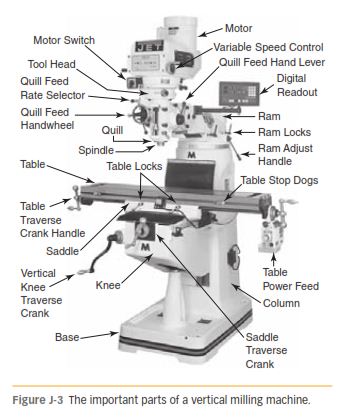 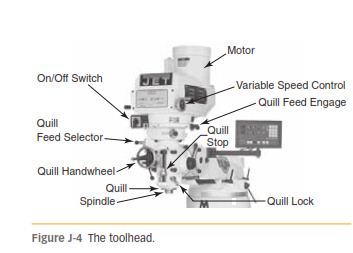 The toolhead (Figure J-4) is attached to the end of the ram
and contains the motor, which powers the spindle. The motor
is turned on with a three-position switch (Forward/
Off/Reverse). Be sure that the spindle is rotating in the proper
direction when you turn on the machine. Speed changes are
made with V-belts, gears, or variable-speed drives. When you
change speeds into the high or low speed range, the spindle
has to be stopped. The same is true for V-belt or gear-driven
speed changes. On variable drives the spindle must be revolving
while speed changes are being made.
The quill is nonrotating and contains the rotating
spindle. The quill can be extended and retracted into the
toolhead by a quill feed hand lever or handwheel. The quill
feed hand lever is used to rapidly position the quill or to
drill holes. The quill feed handwheel gives a controlled slow
manual feed, as is needed when boring holes.
Power feed to the quill is obtained by engaging the feed
control lever. Different quill feed rates, usually .0015, .003,
and .006 in. per spindle revolution, are selected with the
power feed change lever. The power feed is automatically disengaged
when the quill dog contacts the adjustable micrometer depth stop
(Figure J-5). 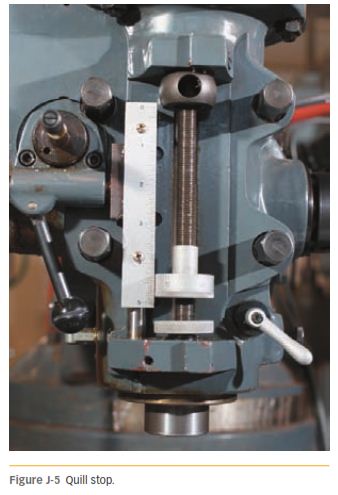 feed disengages when the quill reaches its upper limit. The
micrometer dial allows depth stop adjustment in .001-in.
increments. The quill clamp is used to lock the quill in a fixed
position. To obtain maximum rigidity while milling, you
must tighten the quill clamp.
The spindle lock or spindle brake is used to keep the
spindle from rotating when installing or removing tools
from it. Tools are usually held in collets, which are secured in
the spindle with a drawbolt. The drawbolt threads into the
upper end of the collet. When the drawbolt is tightened, the
collet is drawn into the taper in the spindle. This aligns and
also holds the tool. To release a tool from the spindle, use the
following procedure:
Step 1 Use the spindle brake to lock the spindle.
Step 2 Raise the quill to its top position and lock.
Step 3 Unscrew the drawbolt one turn.
Step 4 With a lead hammer give the drawbolt a firm blow.
This should release the collet from the spindle taper. At the
same time, the tool is released from the collet. You should be
holding the tool with a shop towel during this step to pre-
vent the tool from falling on the workpiece or the machine
table.