Home / CNC Technology / HOW THREADS ARE CUT ON A LATHE

Threads are cut on a lathe with a single-point tool by taking a series of cuts in the same helix of the thread. This is sometimes called chasing a thread.A direct ratio exists between the headstock spindle rotation, the lead screw rotation, and the number of threads on the lead screw. This ratio can be altered by the quick-change gearbox to make a variety of threads.When the half-nuts are clamped on the thread of the lead screw, the carriage will move a given distance for each revolution of the spindle. This distance is the lead of the thread. 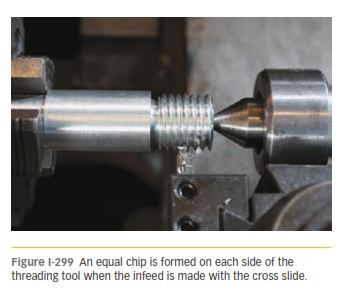 If the infeed of a thread is made with the cross slide (FigureI-299), equal-sized chips will be formed on both cutting edges of the tool. 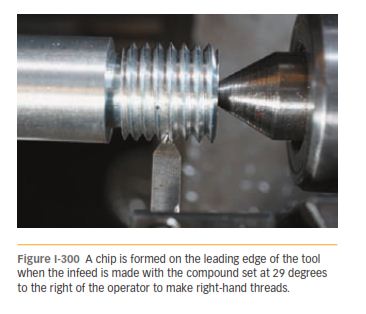 This causes higher tool pressures, which can result in tool breakdown, and sometimes causes tearing of the threads because of insufficient chip clearance. A more accepted practice is to feed in with the compound, which is set at 29 degrees (Figure I-300) toward the right of the operator, for cutting right-hand threads. This ensures a cleaner cutting action than with 30 degrees, with most of the chip taken from the leading edge and a scraping cut from the following edge of the tool.