Determining the Size of the Machine
The size of a horizontal milling machine is usually given as the range of movement possible and the power rating of the main drive motor of the machine. An example would be a milling machine with a 28-in. longitudinal travel, 10-in. cross travel, and 16-in. vertical travel with a 5-hp main drive motor. As the physical capacity of a machine increases, more power is also available at the spindle through a larger motor.
Identifying Major Parts, Controls, and Their Functions
The major assemblies of the horizontal mill are the base and column, knee, saddle, table, spindle, and overarm (Figure K-5). 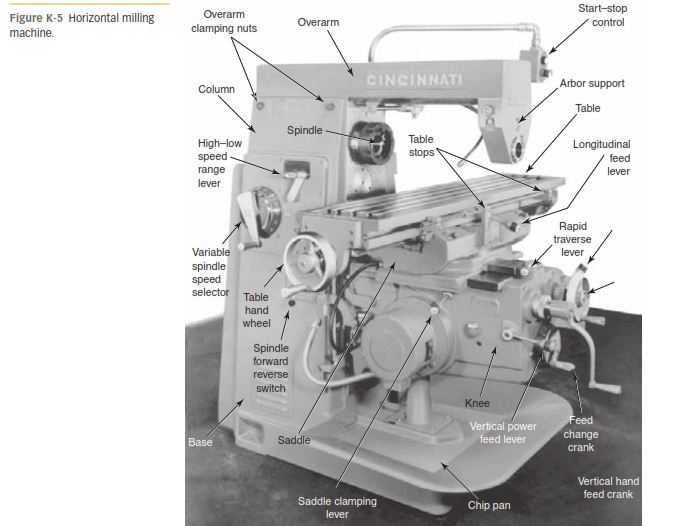 Base and Column The base along with the column forms the one-piece major structural component of the machine tool. A dovetail slide is machined on the vertical face of the column, providing an accurate guide for the vertical travel of the knee. A dovetail slide is also machined on the top of the column, providing a guide for the overarm. The column also contains the machine spindle, main drive motor, spindle speed
selector mechanism, and spindle rotation direction selector. Knee The knee engages the slide on the face of the column and is moved vertically by turning the vertical hand feed crank.
A slide on the top of the knee provides a guide for the saddle. Saddle The saddle engages the slide on the top of the knee
and is moved horizontally toward or away from the face of the column by turning the crossfeed handwheel. The saddle supports the table.
Table The table engages the slide on the top of the saddle and can be moved horizontally right and left by turning the table handwheel. The table is equipped with T-slots for direct mounting of the workpiece, vise, or other fixture.
Spindle The machine spindle is located in the upper part of the column and is used to hold, align, and drive the various cutters, chucks, and arbors. The front end or spindle nose has a tapered socket with a standard milling machine taper. This taper aligns the milling machine adapter or cutter arbor. Driving force is provided by two keys located on the spindle nose. These engage slots on the adapter or arbor. Arbors and adapters are held in place by means of a drawbolt extending through the hollow center of the spindle to the rear of the machine. As in the vertical mill, the drawbolt is threaded on one end and is designed to screw into the thread in the end of the arbor or adapter shank. Tightening the drawbolt lock nut draws the taper shank of the arbor into the spindle taper.
Overarm and Arbor Support The overarm engages the slide on the top of the column and may be moved in and out by loosening the overarm clamps and sliding this part to the desired position. The arbor support engages the dovetail on the overarm. The arbor support contains a bearing that is exactly in line with the spindle of the mill. The arbor support provides a rigid bearing support for the outer end of the mill arbor.

Controls for Manual Movements Cranks and crank handwheels are provided to elevate the knee and move table and saddle. All these controls are equipped with a micrometer collar graduated in .001-in. increments. 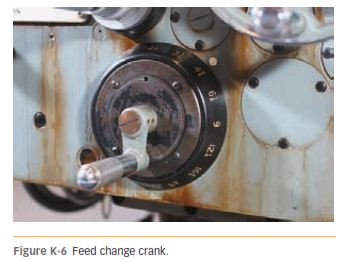 The feed rate selector is located on the knee (Figure K-6) and is used to select the power feed rate for table, saddle, and knee in inches per minute (ipm). Power feeds are engaged by individual controls on the table, saddle, and knee. However, engaging all these at the same time will cause all these components to move under power at the same time.
mills, power feeds will not function unless the spindle is turning. Two safety stops at each axis travel limit prevent accidental damage to the feed mechanism by providing automatic kickout of the power feed. Adjustable power feed trip dogs are also provided so that you may preset the point at which the feed is to be disengaged.

Using the Rapid Traverse To expedite the positioning of the knee, saddle, and table to rapidly move the workpiece up to the cutter or clear of the overarm, a rapid traverse feature is provided. When the rapid traverse control is engaged (Figure K-7), it overrides the feed rate selector and rapidly moves the table, saddle, or knee, depending on which feed control is engaged. The direction of rapid traverse is in
the same direction as that of the feed. Furthermore, the rapid traverse will rapidly move the knee, saddle, and table all at the same time if all these parts should happen to have their feed controls engaged. Be careful when using the rapid traverse function not to run the work or table into the cutter or overarm. This will damage the work, cutter, and machine and can cause an injury.
Spindle Controls Spindle controls include the main motor switch, clutch, spindle speed, and speed range controls. The motor switch will usually reverse the motor and spindle direction electrically. On some mills, spindle rotation is changed mechanically. A clutch is sometimes used to connect spindle and motor.
Spindle speeds are selected from the control on the side of the column (Figure K-8). Several spindle speeds are available in both a low- and a high-speed range. Variablespeed controls are also used.
The speed range selector is adjacent to the speed selector. This control has a neutral position between high- and low-speed settings. In the neutral position, the spindle may be turned by hand during machine setups. Spindle speed and direction must be selected and set
while the motor and spindle are stopped. Shifting gears while the spindle is turning can damage the drive mechanism.
However, on variable-speed drives, speeds must be set while the spindle is in motion.
Locks are provided on the table, saddle, and knee. These permit the components to be locked in placeduring a machining operation to increase setup rigidity.

All locks must be released before moving any part either by hand or under power. During machining, locks should be set except the one
on the moving axis. Locks should not be used to compensate for wear in the machine slides.