Odd-Shaped Workpieces A magnetic or vacuum chuck will exert the most reliable holding power on an odd-shaped workpiece, if the area of
contact with the chuck is large enough. Whenever possible, place the workpiece so that the largest surface area possible is on the chuck. Sometimes it is necessary to block a small or thin part with additional material to prevent the part from moving on the chuck during the grinding process. 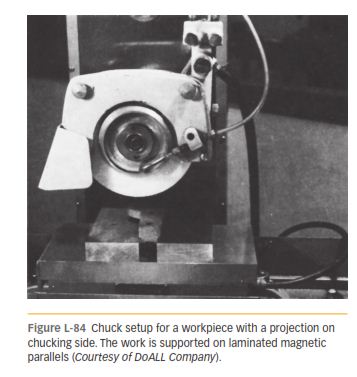 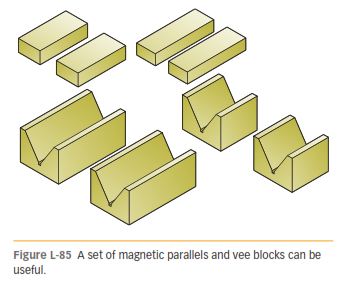 The blocking, of course, needs to be thinner than the workpiece if it is not to be ground also. Sometimes it is necessary to chuck on a smaller-than-desirable area (Figure L-84). In these cases, the workpiece must be supported with magnetic (laminated) parallels or vee-blocks (Figure L-85). These are specially designed for grinder work. These laminated accessories are made with nonmagnetic and soft steel inserts so that
the lines of magnetic force will be conducted through to the workpiece. Laminated parallels must be treated with great care because the magnetically permeable materials are soft. They should be checked carefully for burrs each time they are used. Odd-shaped workpieces may also be held by traditional precision milling-type machine tool work-holding methods such as vises or clamps.
Nonmagnetic Work 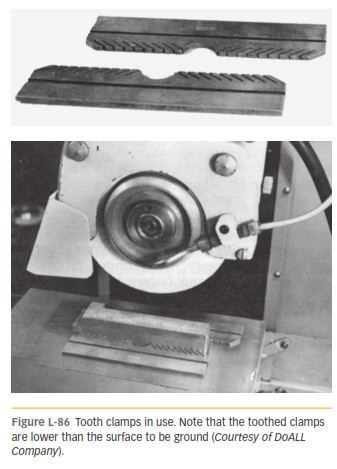 Nonmagnetic materials may be held on a magnetic chuck by blocking the parts with steel (magnetic) tooth clamps (Figure L-86). The comblike teeth will keep a nonmagnetic workpiece from sliding off the chuck. As the magnetism is applied, the comblike teeth of the clamps are pulled down against the nonmagnetic workpiece to keep the part from sliding off the chuck. If you are using tooth clamps, be sure
that they are lower than the workpiece so that they will not come in contact with the grinding wheel.
Thin Workpieces
Thin material that is already warped or twisted will probably be pulled flat on either a magnetic or vacuum chuck.
However, these workpieces may assume their original distorted shape after grinding and removal from the chuck.
Thin material can be successfully held and ground by using a minimum amount of holding force, but only with light cuts.
One way of doing this is by using double-backed tape (with adhesive on both sides). One side of the tape is applied to the chuck while the other side holds the workpiece. This may be sufficient for light cuts. Avoid the use of grinding fluids when double-backed tape is used, as it can cause part slippage.
The use of double-backed tape requires exercising great care to avoid the risk of part slippage, which can cause significant damage to machine and/or operator.
It is also possible to shim under a warped thin workpiece until one side has been ground true.
The part may then be turned over and the true side placed on the chucking surface.
The grinding of thin cold-rolled steel stock that has not been annealed or normalized can be frustrating. The outside of the material is in much greater compression than the core.
As the highly compressed layer is ground away on one side, the compression of the layer on the opposite side can actually cause the part to warp with enough force to unseat the part from the chuck. It is important to grind uniform amounts from both sides of such materials and to be prepared to grind opposite sides multiple times to get a flat, dimensionally stable part.
If possible, it is best to use hot-rolled steels or workpieces that have been annealed, or otherwise appropriately heat-treated,for grinding.

CAPABILITIES OF THE CENTER-TYPE CYLINDRICAL GRINDER

OTHER FACTORS IN WHEEL SELECTION