Use this dialog to specify the options for flattening an unflattened last. 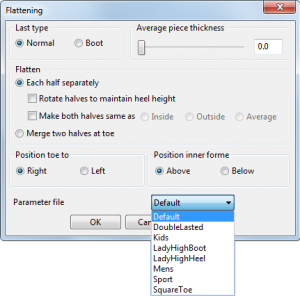 Flattening is created by offsetting the surface of the side of the last by this margin.

Each half separately places the inner and outer halves separately, using the selected symmetry option. Select Rotate halves and Make both halves same as as appropriate.

Inside uses-flattening of the side surface for both sides.

Outside uses outside flattening of the side surface for both sides.

Average uses an average of both sides.

Merge two halves at toe merges the two sides at the toe. This will make the centre-line straight between the vamp point and the toe point, merging the two halves at a common toe point.

Right positions the toe so that it is pointing towards the right after flattening.

Left positions the toe so that it is pointing towards the left after flattening.

Above positions the inner shell above the centre-line after flattening.

Below positions the inner shell below the centre-line after flattening.

It is possible to change these parameters, but making a change will affect the flattening process for every last you create.

When you flatten an offset concept last, the flattening that is displayed will be of the confirmed size that is useful for pattern engineering.

When you sketch lines in 3D on the offset last, they will be automatically mapped to the confirmed last and flattened accordingly.