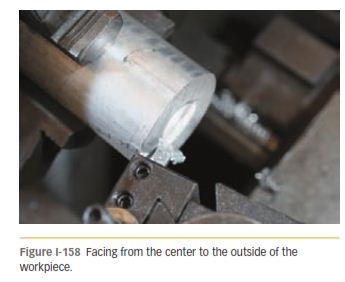 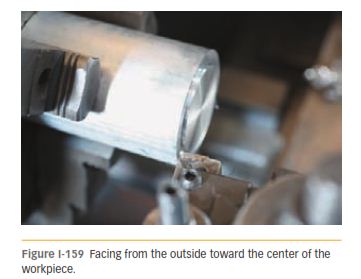 The material to be machined usually has been cut off in a power saw, so the piece is not square on the end or cut to the specified length. Facing from the center out (Figure I-158) produces a better finish, but it is difficult to cut on a solid face in the center. Facing from the outside (Figure I-159) is more convenient, because heavier cuts may be taken, and it is easier to work to the scribed lines on the circumference of the work. When you are facing from the center out, a righthand turning tool in a left-hand toolholder is the best arrangement, but when facing from the outside to the center, a left-hand tool in a right-hand or straight toolholder can be used if you are using old-style toolholders. However,with quick-change toolholding and light cuts, you can place the tool in any convenient position, as shown in Figures I-144, I-158, and I-159. When you are making heavy cuts, the tool pressure should be against the inside of the quick-change tool block, as it is in Figure I-159, to prevent the tool from moving out of place. Facing or other tool machining should not be done on workpieces extending more than five diameters from the chuck jaws. 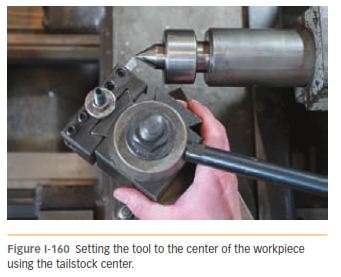 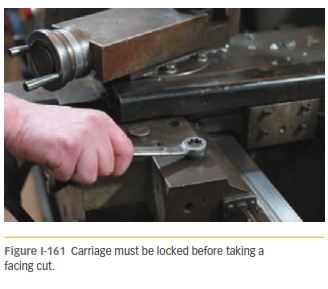 The tool point should be set to the dead center(Figure I-160). This is done by setting the tool to the tailstock center point or by making a trial  cut to the center of the work.If the tool is below center, a small uncut stub will be left. The tool can then be reset to the center of the stub.The carriage must be locked (Figure I-161) when taking facing cuts, as the cutting pressure can cause the tool and carriage to move away, which will make the faced surface curved rather than flat. Finer feeds should be used for finishing than for roughing.Remember, on many lathes, the cross feed is half to one third that of the longitudinal (carriage) feed.On some lathes there is no reduction between carriage and cross slide feed; they are equal. The ratio is usually listed on the index plate of the quick-change gearbox. A roughing feed can range from .005 to .015 in., and a finishing feed from .003 to .005 in. Use of cutting oils will help produce better finishes on finish facing cuts. Some lathes are designed with equal feed rates on the longitudinal and cross feeds. 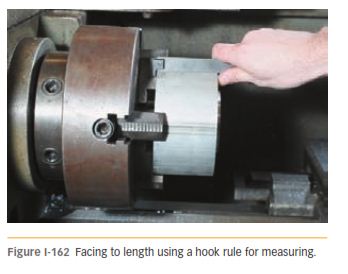 Facing to length may be accomplished by trying a cut and measuring with a hook rule (Figure I-162) or by facing to a previously made layout line. A more precise method is to use the graduations on the micrometer collar of the compound. The compound is set so that its slide is parallel to the ways (Figures I-163 and I-164). The carriage is locked in place, and a trial cut is taken with the micrometer collar set on zero index. The workpiece is measured with a micrometer, and the desired length is subtracted from the measurement. The remainder is the amount you should remove by facing. If more than .015 to .030 in. (depth left for finish cut) has to be removed, it should be taken off in two or more cuts by moving the compound micrometer dial the desired amount. A short trial cut (about in.) should again be taken on the finish cut and adjustment made if necessary. Roughing cuts should be approximately .060 in. in depth, but they can vary considerably, depending on machine size, horsepower, tooling, and setup. 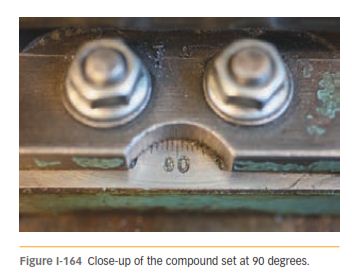 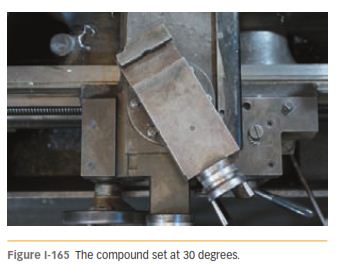 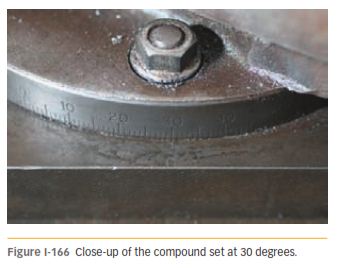 Quite often the compound is kept at 30 degrees for threading purposes (Figures I-165 and Figures I-166). It is convenient to know that at this angle the tool feeds into the face of the work .001 in. for every .002 in. that the slide is moved. For example, if you wanted to remove .015 in. from the workpiece, you would turn in .030 in. on the micrometer dial (assuming it reads single depth).The diameter is usually the critical dimension and should therefore be finished to size after the face is finished.A specially ground tool is used to face the end of a work piecethat is mounted between centers. The right-hand facing tool is shaped to fit in the angle between the center and the face of the workpiece. Half-centers (Figure I-168) are made to make the job easier, but they should be used only for facing and not for general turning. 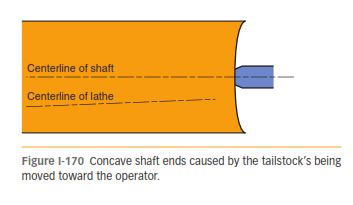 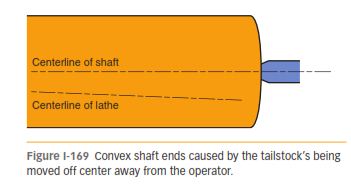 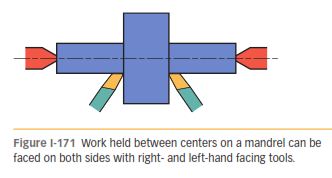 If the tailstock is moved off center away from the operator, the shaft end will be convex; if it is moved toward the operator, it will be concave (Figures I-169 and I-170). Both right-hand and left-hand facing tools are used for facing work held on mandrels (Figure I-171). Care should be taken when machining pressure is toward the small end of a tapered mandrel (usually toward the tailstock). Excessive pressure may loosen the workpiece on the mandrel.

SETTING UP FOR FACING

SPEEDS AND FEEDS FOR TURNING