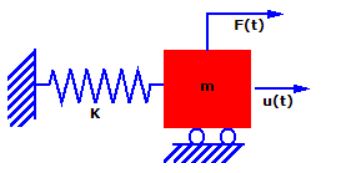 u..(t) is the acceleration of the mass at time (t) and it is equal to the second derivative of u with respect to time

k = is the stiffness of the spring

Theoretically, if the mass is displaced and released, it will continue to vibrate with the same amplitude forever. In practice, the mass vibrates with progressively smaller amplitudes until it comes to rest. This phenomenon is called damping and it is caused by loss of energy through friction and other effects. Damping is a complex phenomenon. For the purpose of this discussion, assume that the damping force is proportional to the velocity. This type of damping is called viscous damping. 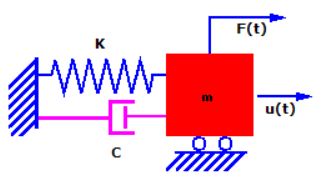 Considering damping, the above equation becomes:

u.(t) is the velocity of the mass at time (t), and it is equal to the first derivative of u with respect to time

In static studies, velocity and acceleration are so small that they can be neglected and F and u are not functions of time. The above equation reduces to: F=ku.

For a Multi-Degree-of-Freedom (MDOF) system, m, c, and k become matrices instead of single values and the equations of motion are expressed as:

: velocity vector at time t (velocity components of every node)