Heat conduction in solids is similar to the conduction of electricity in electrical conductors in many aspects. In a conductor, the flow of electricity is driven by a potential difference and so is the flow of heat driven by a difference in temperature. In electric conduction, electric charge is transported from one point in a conductor to another by the motion of the electrons, in thermal conduction, heat is transported from one point of a solid to another by the vibration of the molecules of the solid due to their increased energy.

Heat conduction is governed by Fourier’s law which states that: the rate of heat transfer (Q) between two sufficiently close points in a medium is proportional to the temperature difference between the two points (T1-T2) divided by their separation (Δx) and the area normal to the direction of heat flow (A). The constant of proportionality is called the coefficient of thermal conductivity of the material (k). Mathematically, this statement can be written as:

where Q is the rate of heat transfer in Watts.

The above equations suggest that the following analogy holds:

The next figure shows the analogy between the two phenomena. 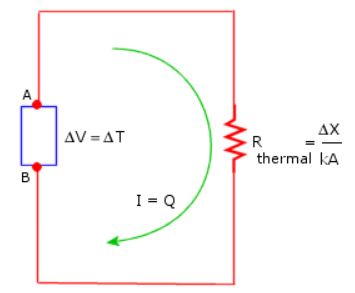