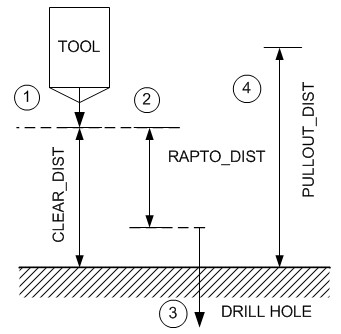 Figure 1 – Holemaking Parameters
The following is a list of key manufacturing parameters that control
holemaking sequences.
• SCAN_TYPE – Calculates the order for drilling selected holes. Options
available are:
– TYPE_1 – Increments the Y-coordinate and goes back and forth in
the X-direction.
– TYPE_SPIRAL – Goes clockwise starting from the hole nearest to the
coordinate system.
– TYPE_ONE_DIR – Increments the X-coordinate and decrements the
Y-coordinate.
– PICK_ORDER – The holes are drilled in the same order as they are
selected.
– SHORTEST – Creo Parametric determines which order of holes results
in the shortest machine motion time. This is the default value.
• BREAKOUT_DISTANCE – This adds the BREAKOUT_DISTANCE value to
the Z-depth in the CYCLE statements associated with holes drilled with the
Thru All option, and with through-holes drilled using the Auto Depth option.
• PECK_DEPTH – The depth increment for each drilling pass. Default
value is 0. If you select DEEP drilling, you have to specify a non-zero
PECK_DEPTH.
• CLEAR_DIST – The clearance distance above the top of the hole at which
the PLUNGE_FEED ends and the CUT_FEED begins.
• RAPTO_DIST – Enables further rapid advance from CLEAR_DIST toward
the top of the hole.
• PULLOUT_DIST – Enables the tool to return to a point other than that
defined by CLEAR_DIST.
Connect Motions
• You can use the Connect cut motion in the Customize dialog box to
configure specific connection moves between holes during drilling.

Lead In and Lead Out Motions