Drawing with Grid and Snap Autocad

Your drawing area now has the proper settings, and it is zoomed to a convenient magnification. You’re ready to draw the first lines of the cabin:
1. When the Command window displays the Type a command prompt,
start the LINE command.
2. From the Home tab ➢ Draw panel, click the Line button or type L↵.
3. Type 8′,8’↵ (2500,2500↵), or move the cursor until the Dynamic
Input fields indicate the cursor is over the 8↵, 8↵ (2500, 2500) point.
4. Click to define the starting point of the line.
5. Hold the crosshair cursor above and to the right of the point you just
picked.

AutoCAD shows ghosted linear and angular dimensions that
dynamically display the length and angle of the first line segment as
the cursor moves, and a tool-tip window displays the current prompt
for the LINE command (see Figure 3.11). 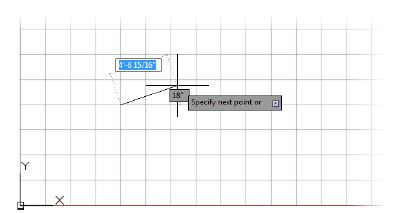 F igu re 3 . 1 1 : One point picked on the grid
6. Don’t click yet. Hold the crosshair cursor directly out to the right of
the first point picked, and note how the linear dimension displays a
distance in 6″ (50 mm) increments. The angular dimension should
have an angle of 0.00, as shown in Figure 3.12.

F igu re 3 . 1 2 : Setting the angle for the first line
7. Continue moving the crosshair cursor left or right until the dashed
linear dimension displays 28′ (8550)

8. At this point, click the left mouse button to draw the first line of the
cabin wall (see Figure 3.13). 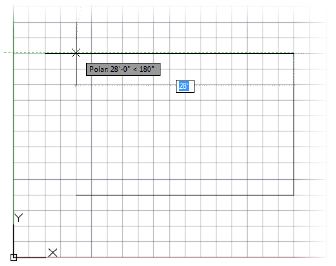 11. Type C↵ to close the box.
This tells AutoCAD to draw a line from the last point picked to the
first point picked and, in effect, closes the box. AutoCAD then automatically
ends the LINE command (see Figure 3.15). 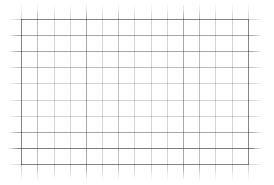 F igu re 3 . 1 5 : The completed outside wall lines
This method for laying out building lines by using Snap And Grid and
Dynamic Input is useful if the dimensions all conform to a convenient roundedoff
number, such as the nearest 6 inches. The key advantage to this method over
just typing the relative coordinates, as you did with the box in Chapter 2, is that
you avoid having to enter the numbers. You should, however, assess whether
the layout you need to draw has characteristics that lend themselves to using
Snap And Grid and Dynamic Input or whether typing the relative coordinates
would be more efficient. As you get more comfortable with AutoCAD, you’ll see
that this sort of question comes up often: which way is the most efficient? This
happy dilemma is inevitable in an application with enough tools to give you
many strategic choices. In Chapter 4, “Developing Drawing Strategies: Part 1,”
and Chapter 5, “Developing Drawing Strategies: Part 2,” you’ll learn other techniques
for drawing rectangles.

Using the Current Layer as a Drawing Tool
Share