lines across the gap between jamb lines to show that an opening doesn’t extend to the ceiling; hence, you’ll create the header.
To draw headers directly onto the correct layer, you need to make the
A-WALL-HEAD layer current. As you’ve seen, you can use the Layer Properties Manager. But several shortcuts also exist, including the Layer drop-down list in the Layers panel you’ve used to assign layers and the command-line interface you’ll use in this exercise:
1. Make sure I06-09-SelectSimilar.dwg (M06-09-SelectSimilar.dwg)
is open.
2. At the command line, enter A-WALL but do not press ↵. The menu
shown in top of Figure 6.35 will appear, listing any layers in the current
drawing whose name begins with A-WALL. Select the A-WALLHEAD
layer from the list.

F igu re 6 . 3 5 : Selecting the A-WALL-HEAD layer from the AutoComplete
suggestion list (top), and the A-WALL-HEAD layer shown as the current layer in the
Layers panel (bottom)
Once selected, the A-WALL-HEAD layer appears in the list box (see
the bottom of Figure 6.35), telling you that the Headers layer has
replaced Walls as the current layer.
3. Make sure object snaps (osnaps) are enabled by clicking the Object
Snap button on the status bar or by pressing F3. The Endpoint,
Midpoint, and Intersection osnaps are now active. If they aren’t,
right-click the Object Snap button and, in the context menu, click
the osnaps that you want active.
4. From the Home tab ➢ Layers panel, click the Freeze tool. As you
begin to draw the headers, other objects, such as the doors and
thresholds, may get in the way. You’ll use the Freeze tool to select the
layers graphically instead of opening the Layer Properties Manager to
freeze the respective layers.

5. At the Select an object on the layer to be frozen or: prompt,
click one door or door swing (A-DOOR) and one threshold (A-DECKSTRS).
All the objects on the Doors and Steps layers temporarily
disappear.
6. Press Esc to end the Freeze command.
You need to draw two parallel lines across each of the three openings,
from the endpoint of one jamb line to the corresponding endpoint
of the jamb on the opposite side of the opening.
7. To start the LINE command, enter L↵ or click the Line button from
the Home tab ➢ Draw panel.
8. Move the cursor near the upper end of the left jamb for the back door
until the colored snap marker appears at the upper-left endpoint of
the jamb line, and then click.
9. Move the cursor to the left end of the lower jamb, and click to complete
the line.
10. Right-click once to open a context menu near your cursor (see
Figure 6.36), and then choose Enter from the contextual menu
that displays. 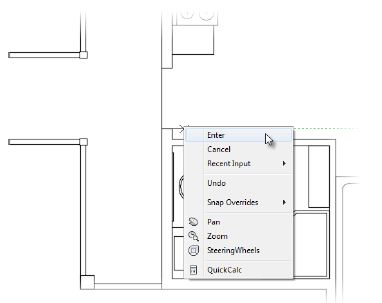 F igu re 6 . 3 6 : The right-click context menu for accessing recent and common
commands

11. Select the header line you just drew and right-click. Choose the Add
Selected option, as shown in Figure 6.37, to create another line with
the same properties as the original line you drew. 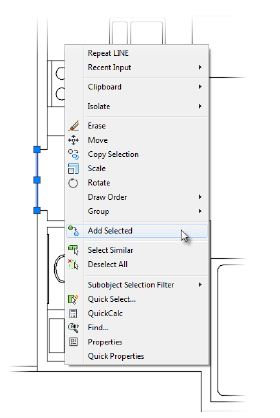 F igu re 6 . 3 7 : Choosing the Add Selected function from the right-click menu
after selecting the header line
The Add Selected function can be a great substitute for the COPY
command. As you have learned, the COPY command creates an identical
duplicate of any object you select. By contrast, the Add Selected
function only duplicates the selected objects properties and launches
a creation command such as LINE, letting you draw whatever you
need.
12. Move to the right endpoint of the upper jamb line for the back door

13. With the same technique used in steps 6 through 12, draw the lower
header line across the opening. You can see the results in the image
on the left in Figure 6.38. 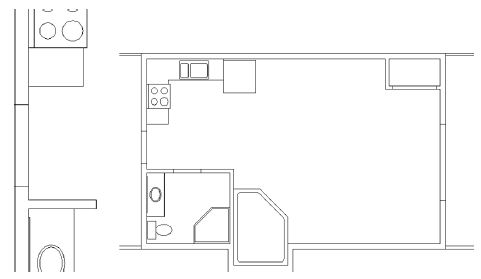 F igu re 6 . 3 8 : The header lines drawn for the back door opening (left) and
for the rest of the doorway openings (right)
14. Keep using the same procedure to draw the rest of the header lines
for the remaining three doorway openings. The floor plan will look
like the image on the right in Figure 6.38.
15. Save this drawing as I06-10-Headers.dwg (M06-10-Headers.dwg).

Cutting Openings in the Walls

Completing the Stove with Parametrics Autocad