Cutting Openings in the Walls

Of the four doorway openings needed, two are on interior walls and two are on exterior walls (see Figure 4.28). Two of the openings are for swinging doors, one is for a sliding glass door, and one is for a set of bifold doors. You won’t be doing the hatchings and dimensions shown in the figure—those features will be covered in future chapters. 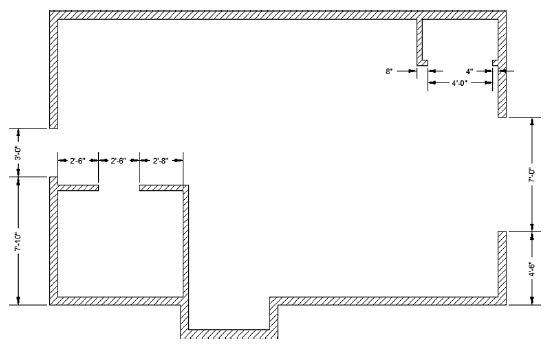 F igu re 4 . 2 8 : The drawing with doorway openings
The procedure used to make each doorway opening is the same one that you
used to create the opening for the box in Chapter 2. First you establish the
location of the jambs, or sides, of an opening. After the location of one jamb is
located, the line defining that side is offset by the width of the door opening.
When the jambs are established, you’ll trim away the wall lines between the
edges. The commands used in this exercise are OFFSET, EXTEND, and TRIM. You’ll
make openings for the 3′-0″ (915 mm) exterior doorway first.

Completing the Stove with Parametrics Autocad