Several methods are used for indexing or dividing multiplelead threads. 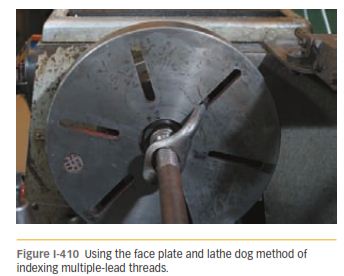 One method is to use an accurately slotted face plate (Figure I-410). The lathe dog is moved 180 degrees for two leads, 120 degrees for three leads, and 90 degrees for four leads. This method will work only on external threading. 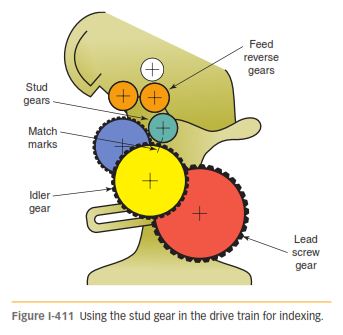 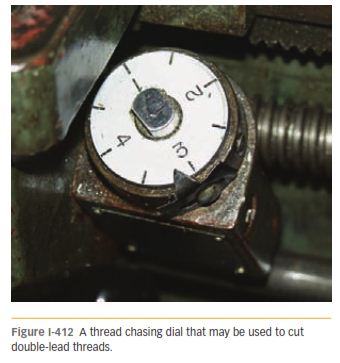 Another method is to mark the stud gear at 180 degrees for A thread chasing dial (Figure I-412) may be used to cut double threads if they are fractional or odd numbered. The first lead is cut on the numbered lines; the second lead is cut on the unnumbered lines. Some experimentation on various lathes will be useful to determine where the divisions will be found. If you cut the thread with the compound set at 29 degrees, be sure to back the compound out to its original position when you move to the next lead. Many machinists prefer to index the thread with the compound set at 90 degrees, or parallel to the ways (Figure I-413). With this method, the tool must be fed straight into the work, so lighter cuts should be taken to keep from tearing the thread. Begin by taking up the slack in the compound feed screw and setting the tool to cut the first lead. Set the Figure I-413 Setting the compound parallel to the ways for cutting multiple-lead threads. To index, move the compound a distance equal to the pitch, always in the same direction.compound and crossfeed micrometer dials to zero. Cut the first thread to the correct depth, and move the compound forward one pitch of the thread using the micrometer dial or a dial indicator. Be sure that the slack is out of the screw at all times. It is a good idea to tighten the compound gibs forthis operation. 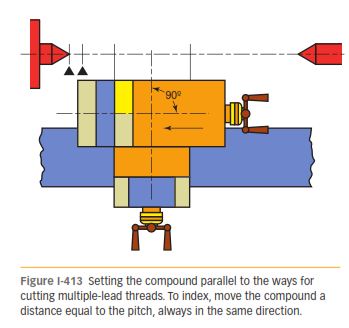 Make the cut for the second lead and check the fit. If it is a two-start thread, for example, use a gage or two-start nut to check it. If the thread is too tight, move the cross slide in a few thousandths of an inch, take a cut, then advance the compound forward to the other position and take the same depth cut. This method may be used for a thread with any number of starts. On coarse threads (under 12 threads per inch), rough out both threads before taking the finishing cuts. Setups or tools may slip out of place slightly on heavy cuts, thus allowing for no adjustment if one thread is already finished. An example of using this method to cut multiple-lead threads follows. If a two-start, double-lead unified screw
thread with .100-in. pitch is required, the following steps can be used to make this thread.

PITCH DIAMETER, LEAD OR HELIX ANGLE, AND PERCENT OF THREADS