CUTTER HOLDING ON THE VERTICAL MILL

No matter which of the milling cutters discussed previously
you might be using, they all must be securely mounted in the
machine spindle before beginning a machining operation.
Collet holders are widely used for this purpose. The most
rigid type of these is the solid collet (Figure J-28), sometimes
called an end mill holder. The solid collet has a precisionground
shank that fits the spindle on the milling machine. 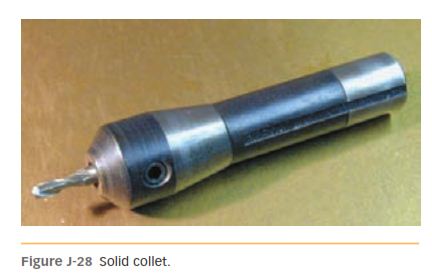 meaning that they will accept all standard R 8 tooling.
The solid collet has a hole that fits the shank of the end
mill. The end mill is secured with setscrews that bear against
a flat on the cutter shank. Solid collets will accommodate
many different sizes of end mill shanks. The split collet
(Figure J-29) is widely used to hold cutters on the vertical
mill. When the tapered part of the collet is pulled into the
spindle taper by the drawbolt, the split in the collet permits
it to squeeze tightly against the shank of the end mill. 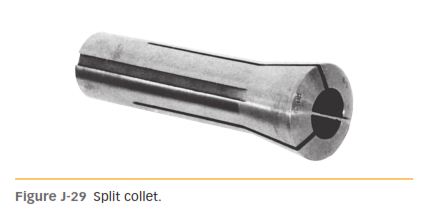 Although split collets are effective cutter-holding devices, it
is possible for a cutter to be pulled from the collet because of
heavy feed rates or a dull cutting tool. Helical flute end mills
may tend to be pulled from the collet as well. In this respect
the solid collet has an advantage over the split type, since
here the setscrews prevent any slippage of the cutter.
Quick-Change Tooling Systems
A quick-change tooling system can facilitate and speed tool
changing. Different tools can be mounted in their individual
toolholders and preset to different lengths if desired.
The toolholders are then mounted and removed from the
master holder in the machine spindle by means of a clamping
ring. Quick-change master collet sets are also available
(Figure J-30) 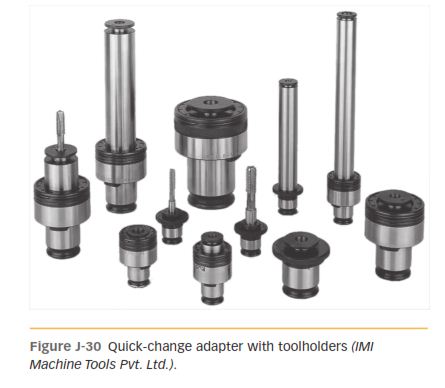 WORK HOLDING ON THE VERTICAL MILL

ATTACHMENTS AND ACCESSORIES FOR THE HORIZONTAL MILL