Because the roof extends beyond the exterior walls the same distance on all
sides of the building, you can generate the eaves lines by offsetting the outside wall lines:
1. Make sure I06-10-Headers.dwg (M06-10-Headers.dwg) is open.
2. Open the Layer drop-down list, and select the A-ROOF layer to make
it current.
3. Start the OFFSET command from the Home tab ➢ Modify panel ➢
Offset tool, or enter O↵ from the command line. Then follow these
steps:
a. At the Specify offset distance or: prompt, press the
down arrow and select the Layer option (see the top image of
Figure 6.40).

F igu re 6 . 4 0 : Choosing the Layer option (left) and the Current option (right)
b. The second prompt reads Enter layer option for offset
objects. Press the down arrow and select the Current option,
or enter C↵ to instruct AutoCAD to create offsets on the current
layer (A-ROOF), as shown in the bottom image of Figure 6.40.
4. Enter 1′6↵ (457↵) when prompted to specify the offset distance.
5. Pick the upper-left, vertical, outside handrail polyline, and then
pick a point to the left of that polyline to offset it to the outside. The
L-shaped offset line is on the Roof (A-ROOF) layer.
6. Move to another side of the cabin, pick the lower-right, outside handrail
polyline, and offset it to the outside.
7. Repeat this process for the three outside wall lines that define the
pop-out on the bottom of the cabin and the short, horizontal, outside
wall line to the left of the pop-out.
You have one offset element on each side of the cabin (see Figure 6.41).

8. Press ↵ to end the OFFSET command.
9. Start the FILLET command from the Home tab ➢ Modify panel ➢
Offset tool.
10. Verify that the fillet radius is set to 0 by entering R↵ and then 0↵ (or
use the Shift key to override the radius value).
11. Starting with the horizontal portion of the upper-left, L-shaped polyline,
click two of these newly offset lines that are on adjacent sides of
the building.
12. Work around the building in a clockwise manner, being sure to click
the half of the line nearest the corner where the two selected lines
will meet (see the top of Figure 6.42). 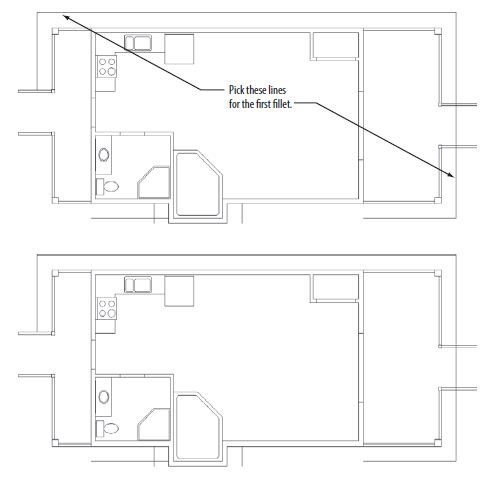 The lines extend to meet each other and form a corner (see the
bottom of Figure 6.42). The FILLET command ends.
13. Press ↵ to restart the FILLET command, and then enter M↵ to select
the Multiple option.
Pick the remaining pairs of adjacent lines that will meet at the
corners. When you try to fillet the final section, you’ll get a warning
at the command prompt that reads Lines belonging to polylines
must be consecutive or separated by one segment, and the
command prompt returns to Select first object or:.
Although it looks as though the polyline has a single gap between
two adjacent segments, in actuality the gap is between the first (vertical)
segment and the eighth (horizontal) segment. You can’t use
the PEDIT command’s Close option yet because it would add an additional,
diagonal segment from the polylines’ existing endpoints. You
could explode the polyline into individual lines, execute the fillet, and
then use PEDIT to join them, but in this case you’ll use the polylines’
grips to close the gap.
14. Press the Esc key to terminate the FILLET command.
15. Click the polyline to select it and display its grips.
You can temporarily turn off the Quick Properties panel by clicking
the X in the upper-right corner, or you can turn it off completely
by clicking the Object Properties button in the status bar.