Exterior walls are slightly thicker than interior walls because they are sturdier,
are load bearing, and have an additional layer or two of weather protection
such as siding or stucco. Accounting for these properties, the standard thickness
for your exterior walls will be 6″ (150 mm). Using the tools you’ve already
learned, you’ll apply the strategy outlined at the start of this chapter to offset
the four existing wall lines to the inside, creating the exterior wall definition.
This section introduces the use of polylines as an alternative to the FILLET
command. Whereas a line is a single, straight object with no measurable width,
polylines are composed of several straight or curved segments that can also
maintain a user-defined width. When a polyline is offset, all segments are offset
equally, and the corners are left sharp without the need to use the FILLET command
to clean them up. Any polyline can be disassembled into its component
lines and arcs by using the EXPLODE command.
The JOIN command allows objects of different types to be joined into a polyline.
By using JOIN, you can convert any combination of lines and arcs into a
single polyline, as long as the endpoints of the various segments terminate in
exactly the same location. Because polylines are treated as a single object, converting
the outermost perimeter into a single polyline will automate much of
the cleanup as you continue creating the floor plan shown in Figure 4.2. 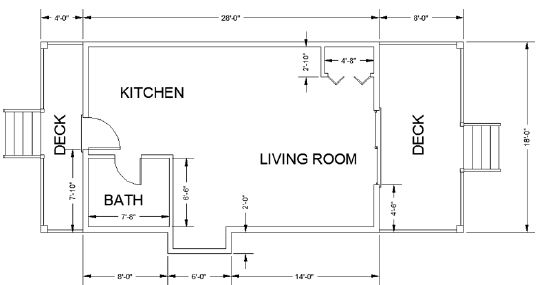 F igu re 4 . 2 : The wall dimensions
In this exercise, you will create a polyline from the individual line segments
composing the outside wall:
1. With AutoCAD running, choose Application menu ➢ Open ➢ Drawing.
The Select File dialog box opens, where you can navigate to the
I03A-FPLAYO.dwg (M03A-FPLAYO.dwg) file you saved at the end of
Chapter 3. Click Open to display the cabin drawing shown in Figure 4.3. 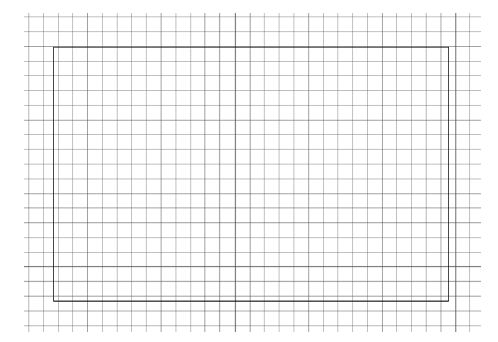 F igu re 4 . 3 : The cabin as you left it in Chapter 3
2. Click the Grid Display and Snap Mode icons on the status bar to turn
them off (the blue glow disappears). Alternatively, you can press F7 to
turn off Grid Display and F9 to turn off Snap mode.
3. Expand the Modify Ribbon panel on the Home tab and click Join, as
shown in Figure 4.4. Command-line users can type J↵ to start the
JOIN command.

4. Select one of the exterior wall lines.
The selected line glows blue, and the command line prompts you
to select objects to join to the line you just selected, as shown in
Figure 4.5. 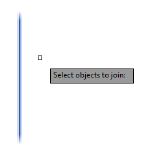 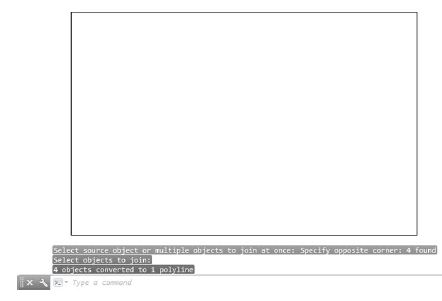 F igu re 4 . 6 : The command-line interface after converting the lines into a
single polyline

6. Select one segment of the polyline that forms the perimeter of the
box in the drawing area.
All four polyline segments are selected (blue glow), indicating that
they exist as a single object, and blue boxes appear at the corners along
with blue rectangles at the midpoint of each segment. The blue boxes
and rectangles, called grips, appear because you selected the object
outside a command. Grips are not exclusive to polylines. (You’ll learn
more about them in Chapter 8, “Controlling Text in a Drawing.”)
7. Choose Application menu ➢ Save As ➢ AutoCAD Drawing and name
this drawing I04-01-JoinLines.dwg (M04-01-JoinLines.dwg).