You can create all the windows in the cabin floor plan from one block, even
though the windows are four different sizes (see Figure 7.22). You’ll create a
window block and then go from room to room to insert the block into the walls:

F igu re 7 . 2 2 : The cabin windows in the floor plan
1. Continue using I07-03-InteriorDoor.dwg (M07-03-InteriorDoor.dwg),
or open it if it’s not already open.
2. Make layer 0 the current layer.
3. Right-click the Object Snap button on the status bar; click the
Midpoint and Perpendicular osnaps, if necessary, to set them as
running osnaps; and deselect Intersection.
The Osnap menu should look similar to Figure 7.23. Turn on the
Object Snap option in the status bar.

4. Using a zoom window, zoom in to a horizontal section of wall
where there are no jamb lines or intersections with other walls (see
Figure 7.24).
Select this area with a zoom window. 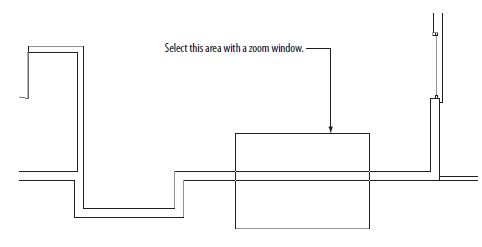 F igu re 7 . 2 4 : Making a zoom window
Because the widths of the windows in the cabin are multiples of
12″ (305 mm), you can insert a block made from a 12″ (305 mm)
wide window for each window, and you can apply an X scale factor to
the block to make it the right width. The first step is to draw a window
12″ (305 mm) wide inside the wall lines.
5. Start the LINE command and then specify Nearest Osnap from either
the Shift+right-click menu or by entering NEA↵.
The Nearest osnap will allow you to start a line on one of the wall
lines. It snaps the cursor to any part of any object that is under the
cursor and guarantees that the objects form an intersection but do
not cross.
6. Move the cursor to the upper wall line, a little to the left of the center
of the screen, and with the hourglass-shaped marker displayed as
shown in Figure 7.25, click.

F igu re 7 . 2 5 : Starting the line by using the Nearest osnap
A line begins on the upper wall line.
7. Move the cursor to the lower wall line. The Perpendicular marker
appears directly below the point you previously picked. When it’s displayed,
click.
The line is drawn between the wall lines, as shown in Figure 7.26.
Press ↵ to end the LINE command.

F igu re 7 . 2 6 : Drawing the first window line
8. Start the OFFSET command, and set the offset distance to 12 (305).
9. Pick the line you just drew, and then pick a point to the right of
that line.
The line is offset 12″ (305 mm) to the right. Press ↵ to end the
OFFSET command.
10. Start the LINE command again to draw a line between the midpoint
of the line you first drew and the midpoint, or perpendicular to the
line that was just offset.
After you press ↵ to end the LINE command, your drawing should
look like Figure 7.27.

F igu re 7 . 2 7 : Completed lines for the window block
11. Save your drawing as I07-04-WindowBlock.dwg (M07-04-
WindowBlock.dwg) by choosing Application menu ➢ Save As ➢
Drawing.
The three lines you’ve drawn will make up a window block. They represent
the two jamb lines and the glass (usually called glazing). By varying the X scale
factor from 2 to 6, you can create windows 2′ (610 mm), 3′ (915 mm), 4′ (1220
mm), 5′ (1525 mm), and 6′ (1830 mm) wide. This is a single-line representation with no double lines to indicate the frames, so for scaling the blocks, there is no
thickness issue as there was with the doors.
Before you create the block, you need to decide the best place for the insertion
point. For the doors, you chose the hinge point because you always know where
it will be in the drawing. Locating a similar strategic point for the window is a
little more difficult but certainly possible.
You know the insertion point shouldn’t be on the horizontal line representing
the glazing, because the insertion point will always rest in the middle of the
wall. There is no guideline in the drawing for the middle of the wall, so a centered
insertion would require a temporary tracking point every time a window is
inserted. Windows are usually dimensioned to the midpoint of the glazing line
rather than to either jamb line, so you don’t want the insertion point to be at
the endpoint of a jamb line. The insertion point needs to be positioned on a wall
line but also lined up with the midpoint of the glazing line.
To locate this point, you’ll use an object snap called Mid Between 2 Points, or
the M2P osnap, as it’s commonly called. As the name suggests, the M2P osnap
snaps to a point midway between two other points you select. Follow these steps
to set the base point for the window block along the outside wall line and midway
between the window’s edges:
1. Make sure I07-04-WindowBlock.dwg (M07-04-WindowBlock.dwg)
is open.
2. Start the BLOCK command by clicking the Create Block button on the
Home tab ➢ Block panel.
3. In the Block Definition dialog box, enter A-GLAZ for the block name,
and then click the Pick Point button.
4. Back in the drawing, activate the Mid Between 2 Points option found
on the Shift+right-click context menu. Alternatively, you can enter
M2P↵ at the command line.
The Mid Between 2 Points object snap is rather unique in that it is
generally used with other osnaps and is not found on the Object Snap
toolbar. In this case, you want to find the midpoint between two
endpoints.
5. With the Endpoint osnap running, move the cursor to the lower
end of the left window jamb (see Figure 7.28) and click when the
Endpoint marker appears.
F igu re 7 . 2 8 : Selecting the two endpoints for the M2P osnap
6. Click the lower end of the right jamb to define the insertion point
midway between the two endpoints that you picked.
7. In the Block Definition dialog box, click the Select Objects button.
8. Back in the drawing, select the two jamb lines and the glazing line,
and then press ↵.
9. Back in the dialog box, make sure of the following:
▶▶ The Open In Block Editor check box at the bottom is
unchecked.
▶▶ The Delete radio button is selected.
▶▶ Units are set to Inches (Millimeters).
10. Click OK.
The A-GLAZ block has been defined, and the 12″ (305 mm) window
has been erased.
11. Use Zoom Previous to zoom out to a view of the whole floor plan.
12. Save your drawing as I07-05-WindowDefinition.dwg (M07-05-
WindowDefinition.dwg).
This completes the definition of the block that will represent the windows.
The next task is to insert the A-GLAZ block where the windows will be located
and scale them properly.