Earlier in the book, you used the FILLET command to clean up the corners of
intersecting lines. You can use that command again to clean up some of the
interior walls, but you’ll have to use the TRIM command to do the rest of them.
You’ll see why as you progress through the next set of steps:
1. Make sure I04-04-InteriorWalls.dwg (M04-04-InteriorWalls.dwg)
is open.
2. If you have a mouse with a scroll wheel, double-click the scroll wheel
to zoom to the extents of your drawing. Alternatively, you can use the
Zoom Extents icon found on the Navigation bar or type Z↵ E↵ at the
command line.
Performing a Zoom Extents will make it easier to pick the wall
lines by making the drawing larger on the screen.
3. Expand the Zoom option found on the Navigation bar (Figure 4.16)
and click Zoom Scale.

F igu re 4 . 1 6 : Selecting the Zoom Scale option from the navigation bar
4. When the Enter a scale factor prompt appears, type 0.75x↵. The
drawing zooms out a bit.
You’ve just used two options of the ZOOM command. First, you used
Zoom Extents to display all the objects in your drawing. You then

zoomed to a scale (0.75) to make the drawing 75 percent of the size it
was after using Zoom Extents. This is a change in magnification on the
view only; the cabin is still 28′ (8550 mm) long and 18′ (5490 mm) wide.
5. Start the FILLET command, set the radius to 12, and then press ↵ to
exit the FILLET command.
6. Restart the FILLET command. Press and hold the Shift key as you
click the two interior wall lines shown at the top of Figure 4.17.
The lines are filleted, and the results will look like the bottom of
Figure 4.17. 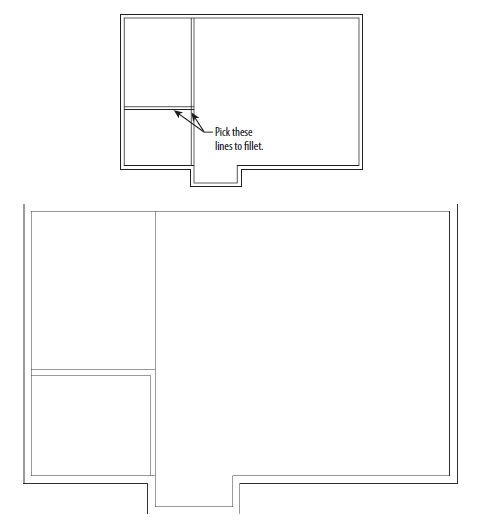 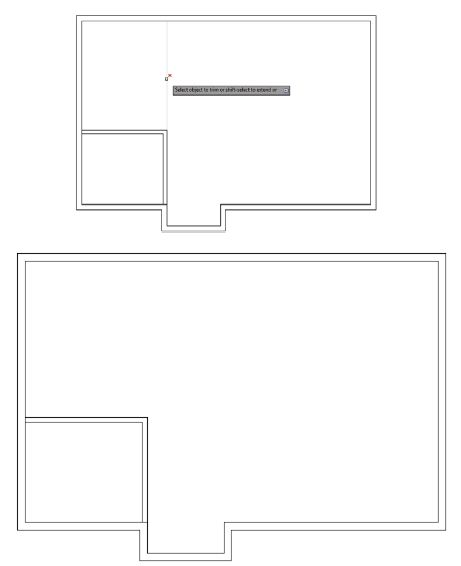 F igu re 4 . 1 8 : Selecting the second two lines to fillet (top) and the result of
the second fillet (bottom)