Although the sizing method you choose can be applied to an entire system, this is not necessarily the most efficient way to do things. If there are 5,257 objects in your system, it’s probably not a great idea to ask your computer to process that amount of information—it may take a while!
The logical choice is to split the task of duct sizing into manageable sections, such as a floor plan, a zone, or a group of air terminals fed from the same VAV box.

The various methods for sizing are as follows:
Friction •u
Velocit y •u
Equal Friction •u
Static Regain •u
Friction and Velocity can be used independently of each other when using the Only option.

Alternatively, they can be used in conjunction with each other with the And and Or functions.
These options allow the designer to force the sizing ducts to meet the parameters specified for both Velocity and Friction. With the Or method, the least restrictive of either of the parameters is used.
The Equal Friction and Static Regain methods use the ASHRAE Duct Fitting Database.

Air properties are set in the Mechanical Settings dialog box, as are the available sizes of ducts used in the actual sizing calculations (see Figure 10.34 and Figure 10.35).
During the sizing process, you can also apply constraints to the branch parts of the run.
These are defined as follows: Calculated Size Only, Match Connector Size, and Larger Of Connector And Calculated (see Figure 10.36). Depending on the stage of the design or your actual role (such as consultant), you could choose to select Calculated Size Only, because the design is still in its early stages and the equipment is Generic. These settings allow you to coordinate with other model components in areas where space is limited. For example, if you have only 2′-0″of space above the ceiling, you could restrict the height of your duct to 20″.

However, later in the project when the equipment has been specified, as a contractor you may want to select Match Connector Size and Larger Of Connector And Calculated to reduce the number of duct sizes used on the project, thereby reducing your manufacturing costs.
This dialog box also allows you to specify a limit on the size of the ducts, which can further reduce costs or give you the ability to specify, say, a continuous duct height in places where you know access is a potential issue.
A new addition to the tools in Revit MEP 2012 is the ability to add insulation and lining to a selection set that contains both ducts and duct fittings, as shown in Figure 10.37.
With this new addition comes more functionality for the user. Lining and insulation can have overrides or filters applied so that they display in the required manner, even to the extent of showing insulation as transparent with a hidden line style, as indicated in Figure 10.38.
Although lining and insulation can be added only as instance parameters, with this new functionality, the process is much easier than in previous releases. Even so, if the entire system requires lined or insulated duct, the user will have to select all ducts for the system and then specify the insulation or lining required.
Duct sizing will work only where air terminals, ducts, duct fittings, and mechanical equipment are seamlessly connected with no gaps, and where the equipment has a defined airflow. This airflow could be entered as part of the initial analysis or subsequent manipulation of the objects 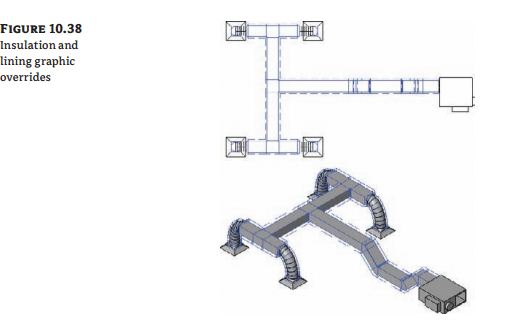