Character Studio is a system built into the 3ds Max program to help automate
the creation and animation of a character, who may or may not be exactly a
biped(two-footed creature). Character Studio consists of three basic components: the Biped system, the Physique and Skin modifiers, and the Crowd system. Biped and Physique are used to pose and animate a single character, and the Crowd system is used to assign similar movements and behaviors to multiple objects in your 3ds Max scene. This chapter covers the Biped and Physique features; the Crowd system is beyond the scope of this book.
The first step in the Character Studio workflow is to build or acquire a
suitable character model. The second step is to skin(bind) the character
model to the skeleton so the animation drives the model properly.
Models should typically be in the reference position known as the “da Vinci
pose,” where the feet are shoulder width apart and the arms are extended
to the sides with the palms down, as shown in Figure 12.1. This allows the
animator to observe all of the model’s features, unobstructed by the model
itself, in at least two viewports. 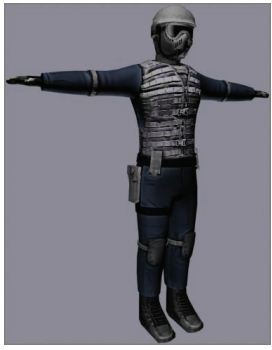 FIguRe 12.1 A bipedal character in
the reference position
In 3ds Max parlance, a biped is a predefined, initially humanoid structure. It
is important to understand that you animate the biped that is associated with
your model and not the model itself. Once the model is bound to the skeleton,
the biped structure drivesthe model. You use the Skin modifier to create that
relationship between the skeleton and the model.