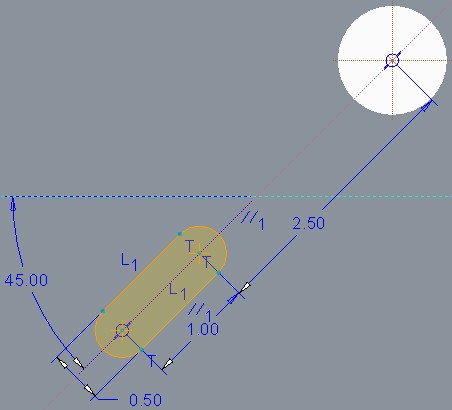 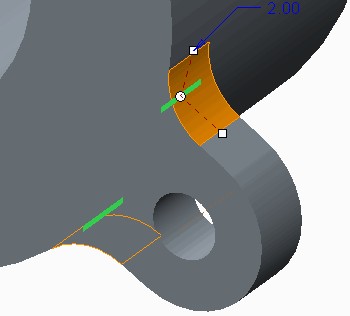 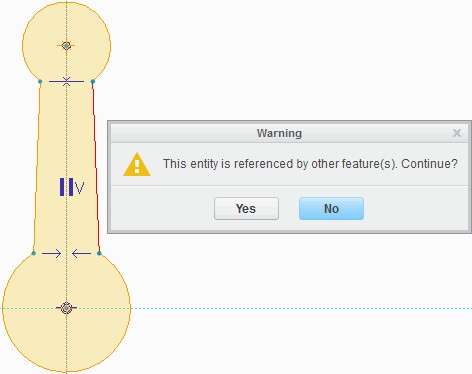 Figure 3 – Editing a Sketch
Analyzing Missing Part Reference Failures
When you modify a parent feature, any children of that feature automatically
update. This functionality is highly beneficial and demonstrates Creo
Parametric’s aptitude for efficiency. However, if a modification to a parent
feature results in the inability of a child feature to locate its parent’s reference,
a failure occurs.
When a feature fails due to a missing reference, the failing feature and its
children highlight in the model tree. A message indicating that the feature
references are missing displays in the feature information.
The following are common causes of missing part reference failures:
• Missing axes — In Figure 1, the slot sketch is dimensioned off of the
hole axis. If the hole is deleted, its axis is deleted, and therefore the
dimensioning reference for the slot is deleted. Thus, the slot feature now
fails due to missing part references.
• Missing references for rounds or chamfers — Occurs if you delete or
redefine a feature and remove the edge that a round or chamfer uses. In
Figure 2, the edges where the boss intersects the remainder of the part are
rounded. If the boss is deleted, the edges are therefore deleted, and the
rounds fail. Missing references can also occur if you insert a feature before
the round or chamfer that causes the edge to be removed. For example, if
you cut material off of an extrude feature, consequently cutting the edge off
that a round references, the round fails.
• Editing a sketch — Can result in changed or removed edges and surfaces
in a model. If those changed or removed edges and surfaces are parents
to other features, failures can occur. In Figure 3, the sketched entity is
being deleted because you want to modify the sketch. However, Creo
Parametric informs you that this entity is referenced by other entities. If you
decide to continue and delete this entity, the child features fail due to the
removal of this reference.
Using the Replace Function
One way to help mitigate missing reference failures when editing sketches
is to use the Replace function. The Replace function transfers references
from an old entity to the new entity you have created. You can click the
Operations group drop-down menu and select Replace while in Sketcher to
access the Replace function. You then select the original entity that contains
the references, and select the new entity to which you want to transfer the
references.
You can also replace dimensions within Sketcher. When you select a
dimension to replace, you must create the new dimension. The new
dimension maintains the original dimension’s sketcher dimension number
(sd#), enabling any relations using the sketcher dimension to remain valid