Geometry failures are caused either by geometry that has been
made invalid, or geometry that is impossible to create.
• Invalid geometry examples:
– Round radii too small or
too large
– Blend start points
mismatch
– Sweep Radii Rule
– Extrude Through Until 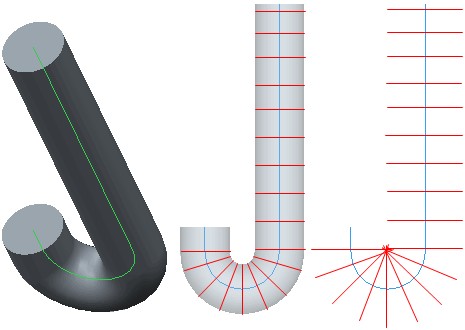 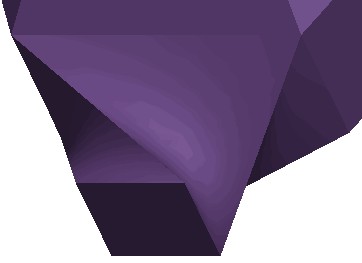 Figure 3 – Blend Start Points Mismatch
Analyzing Geometry Failures
When a feature fails due to invalid or impossible geometry, the failing feature
and its children highlight in the model tree. A message indicating that the
feature geometry could not be constructed displays in the feature information.
Some examples of invalid or impossible geometry include:
• Round radii too small or too large – If a round radius becomes too large
for the geometry that is being rounded, then it fails. In Figure 1, the round
in the left image previews properly because it is small enough to fit on
the geometry. In the right image, the round becomes too large for the
size of the geometry and cannot be created. Hence, the round preview is
no longer available.
• Sweep radii – If a circular section of radius T is swept along a curved
trajectory of radius R, the radius R must be greater than or equal to radius
T or else the resulting geometry overlaps, resulting in invalid geometry. In
Figure 2, the circular section is swept along the curved trajectory, resulting
in the cane-shaped geometry. In the middle image, the red cross-section
lines in the FRONT view show that the geometry does not overlap. Hence,
it is valid and R≥T. In the right image, however, the cross-section radius T
has increased, as shown by the red cross-section lines. As a result, the
cross-section lines overlap, and thus the geometry overlaps. As a result,
the rule of R≥T is not valid, and the geometry cannot be created.
• Blend start points mismatch – If the start points between blend sections
are mismatched by an angle that is too large, the resulting geometry twists
upon itself, which cannot occur. In Figure 3, the blend section start points
are mismatched by 90 degrees and the resulting geometry twists. If the
start points are mismatched by 180 degrees, the feature fails.
• Extrude Through Until – If a feature is extruded to a depth of Through Until,
the feature must actually pass through the selected reference. If it does
not, the feature fails because the geometry cannot be created.